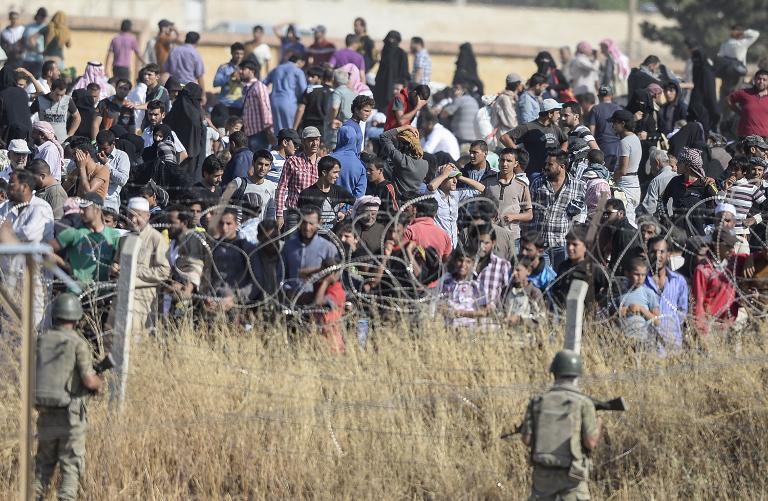 Kurdish fighters advanced Saturday to the outskirts of a key Syrian border town held by the Islamic State group, as Turkish forces sought to prevent thousands fleeing the fighting from crossing the frontier.

Further west, an Islamist rebel alliance pushed IS extremists back from a strategic cross-border supply route.

The Kurdish People’s Protection Units (YPG) edged closer on Saturday to Tal Abyad, a border town used by jihadists as a gateway from Turkey into IS’s bastion province of Raqa.

The Syrian Observatory for Human Rights said YPG fighters, backed by Syrian rebels and air strikes from the US-led coalition fighting IS, advanced to within just a few kilometres southeast of Tal Abyad.

He told AFP there were only 150 IS jihadists holding Tal Abyad itself, and that they, too, had threatened to withdraw if they did not receive reinforcements from Raqa.

“But the leadership in Raqa will not send them reinforcements, because the coalition air strikes have been decimating IS,” Abdel Rahman said.

The YPG marched closer to the vital border crossing after routing the jihadists in Suluk, a town east of Tal Abyad.

Abdel Rahman said most IS fighters had withdrawn from Suluk on Saturday, but had booby-trapped homes and scattered mines throughout the streets.

He said fighting and air strikes around Suluk had killed 16 IS jihadists and at least three civilians on Saturday.

Clashes were ongoing on either side of Tal Abyad, forcing residents to flee south to Raqa city, or north to the Turkish border, he told AFP.

Thousands of displaced Syrians amassed at the frontier, prompting Turkish security forces to use water cannons and fire warning shots to push them away, an AFP photographer said.

Officials said Turkey had taken in over 13,500 refugees escaping the fighting in recent days, but Turkish police and soldiers did not allow anyone through on Saturday.

By late evening many Syrians were preparing to spend the night by the border fence, the correspondent said, as the black flag of IS could still be seen flying over the town of Tal Abyad.

Turkey is a key backer of the political and military opposition to Syrian President Bashar al-Assad, and already hosts more than 1.8 million Syrian refugees.

Shekhmos, who travels to the battle’s front line daily with YPG units, described the terrain as “practically desert, with scattered villages,” and said Kurdish fighters were optimistic about their offensive.

“The Kurdish leadership hasn’t announced what their future offensives will be, but the Syrian groups fighting alongside them… said that after they liberate Tal Abyad, they will go to Raqa city,” Shekhmos told AFP.

Backed by US-led air raids, YPG units scored a landmark victory against IS in January in Kobane, a border town in Aleppo province.

Since then, Kurdish forces have been chipping away at jihadist territory on either side of Raqa — from Hasakeh province to the east, and Aleppo to the west.

Aleppo province is one of the most complicated battlefields in Syria’s multi-front war, with rebels, regime forces, jihadists, and Kurds carving out areas of control.

Late Friday, a Syrian Islamist alliance pushed IS jihadists further back from one if its key supply routes from Turkey into northern Aleppo.

The rebels ousted IS from the village of Al-Bal, leaving 14 rebels and 15 extremists dead, according to the Britain-based Observatory.

The jihadists had captured Al-Bal on Tuesday, bringing them to within 10 km of the strategic Bab al-Salama border crossing.

Further south, the rebels were fighting to defend the town of Marea, on the road linking the crossing and the rebel-held eastern sector of Aleppo city.

Activists said the rebels were simultaneously launching their own attacks on IS positions in the area.

Mamun Abu Omar, head of a local pro-rebel press agency, said “IS is trying to surround the town by occupying the villages all around it.”