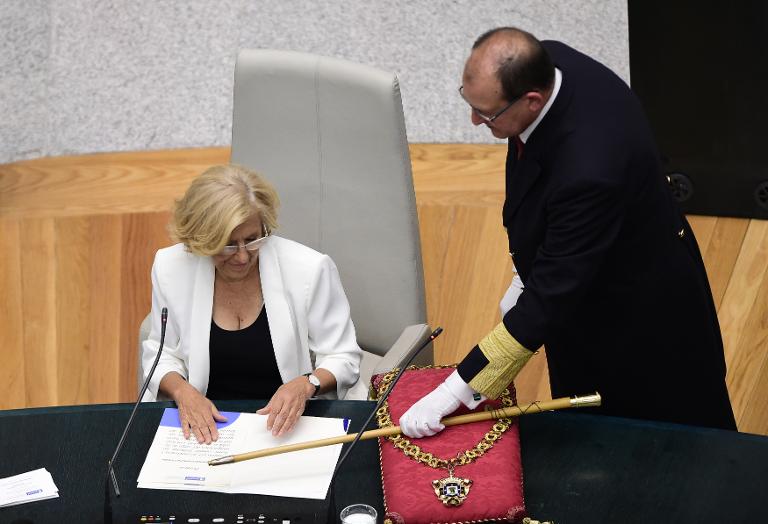 Supporters in both cities shouted the Indignados rallying cry “Yes, it’s possible!” as former judge Manuela Carmena, 71, a communist in her youth, was sworn in as mayor of Madrid, and 41-year-old anti-eviction activist Ada Colau became Barcelona’s first female mayor.

“I promise to loyally respect the duties involved in being mayor of Madrid,” she said after the city council officially voted her in as leader of the city of three million.

Carmena became mayor after her leftist platform, Ahora Madrid, forged an alliance with the main opposition Socialists after the governing Popular Party suffered heavy setbacks in local and regional elections on May 24.

“We are at the service of the citizens of Madrid. We want to govern by listening. We want them to call us by our first names,” Carmena said.

Highlighting her concern with poverty in Spain, where many live precariously even though the worst of the crisis is over, Carmena pledged to help people like a 63-year-old woman named Julia she met on the capital’s main square, Puerta del Sol, who lives on 300 euros ($340) a month.

Madrid suffers a 16 percent unemployment rate, while many who have jobs do not earn enough to get through the month.

Carmena has promised to stamp out corruption, develop public transport, increase subsidies for poor families and slash the mayor’s salary by more than half to 45,000 euros ($51,000).

Many of the new mayor’s supporters come from the Indignados movement that occupied Spanish squares four years ago, demanding an end to government spending cuts to healthcare and education, and to corruption.

Podemos’s pony-tailed leader Pablo Iglesias was present at the city council meeting, clapping for Carmena when the result was read out.

“Our main objective is to win the general election,” he beamed defiantly after the vote.

Prime Minister Mariano Rajoy meanwhile took to Twitter to condemn what he called the “eccentric and sectarian pacts” that had prevented some PP councillors from securing mayoral positions.

People from diverse backgrounds joined the protest movement that brought Carmena and Colau to power, united in their hunger for change in a country ruled by the Popular Party since 2011.

Ideologically, Ahora Madrid has its roots in anarchist and libertarian movements. In her youth, Carmena herself was a communist and dissident against Franco’s rule, using her skills as a lawyer to defend detainees’ rights.

At Saturday’s council meeting, she was supported by 29 of the 57 representatives in the Madrid City Council — 20 from Ahora Madrid and nine from the Socialist party.

In Barcelona, Colau, a committed member of the anti-eviction movement, won an easy, two-thirds majority in the council vote on Saturday against outgoing conservative mayor Xavier Trias.

“Thank you very much to civil society for making the impossible become possible,” Colau said after being sworn in.

While her position was secured when the ERC, a left-wing independent party, and the Socialists threw their support behind her, she must now forge alliances to rule with a stable majority.

Colau has pledged to fight inequalities in the city of 1.6 million by putting an end to evictions, lowering energy prices and bringing in a minimum monthly income of 600 euros ($675).

Like Carmena, Colau wants to reduce her salary to 2,200 euros a month, from the 140,000 a year her predecessor was paid.