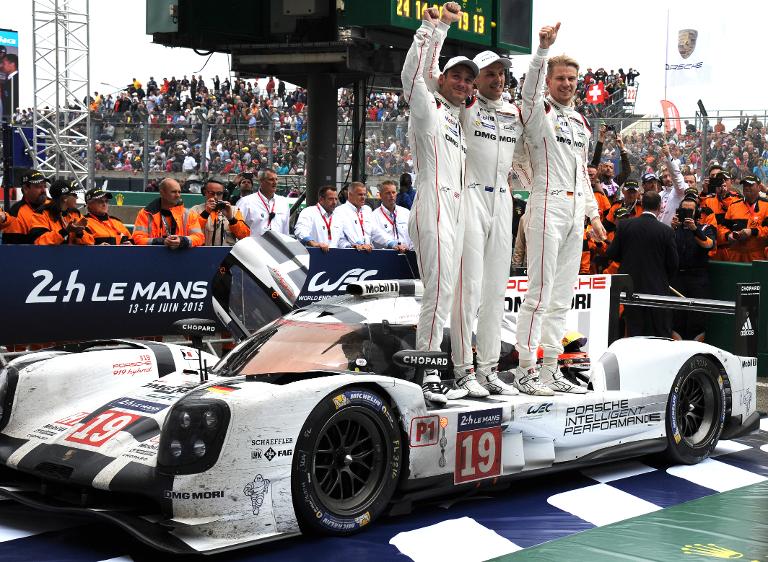 Porsche, led by Formula One driver Nico Hulkenberg, have won their first 24 Hours of Le Mans race for 17 years after holding off the challenge of Audi in a tight duel.

The two German manufacturers had exchanged the lead early on but Porsche managed to fend off their rivals, who had won 13 of the previous 15 races.

The 83rd edition of the race was halted four times, but Germany’s Hulkenberg came home in first place — alongside his two co-drivers Earl Bamber of New Zealand and Englishman Nick Tandy — after controlling the lead for the final few hours of the race in their Hybrid car, clocking up 395 laps.

“It’s difficult to find the right words, it’s probably the best day of my career, maybe even my life,” beamed an ecstatic Hulkenberg, who has raced 83 Grand Prix.

“It’s been a fantastic week, I won with two great drivers, who are good guys. I’m happy to have written a chapter into the history books of Le Mans, I hope to return next year,” added the 27-year-old German.

The number 19 Porsche departed at 1300 GMT on Saturday and were in the second row on the grid, but a terrific performance from Hulkenberg — a Force India driver on the F1 circuit — and his team-mates Bamber and Tandy ensured that Porsche’s 17-year wait for victory was over.

It was a terrific race for the German manufacturer, who also claimed second place, with former F1 driver Mark Webber steering home the number 17 car alongside Brendon Hartley and Timo Bernhard.

Australian Webber — who quit Formula One in 2013 with nine wins to his name — led at one stage with New Zealander Hartley and Germany’s Bernhard, but the trio had to settle for second.

In front of 263,500 spectators, Porsche took victory for the first time since 1998 when Scottish driver Allan McNish and his colleagues Stephane Ortelli and Laurent Aiello took the honours.

Hulkenberg also becomes the first active Formula One driver to win the endurance event since Johnny Herbert and Bertrand Gachot won for Mazda back in 1991.

The German has little time to revel in his achievements though as his attention will now switch to next weekend’s Austrian Grand Prix, with the 27-year-old currently 12th in the drivers’ standings.

Porsche, forced to take a backseat behind Audi in recent years, seized control on Saturday night when Webber’s car hit the front and they seldom looked like relinquishing it despite the close attentions of Audi.

Elsewhere, in the LMGTE Am class American actor Patrick Dempsey took second place on his fourth appearance at the 24 Hours. The 49-year-old, famous for his role as Dr Derek Shepherd in medical television drama Grey’s Anatomy, completed 330 laps around the Circuit de la Sarthe in his Porsche 911 RSR.

Dempsey, who has taken time away from acting to focus on motor racing, finished alongside his team-mates Patrick Long and Marco Seefried with his self-titled Dempsey-Proton team.