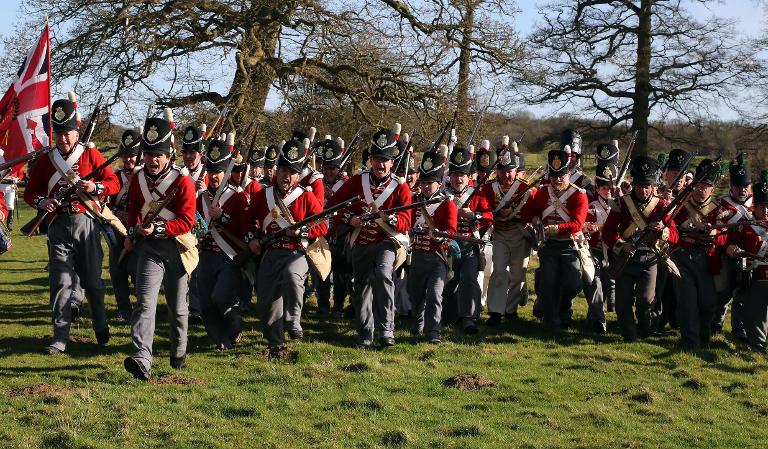 Belgium this week hosts days of commemorative events and mock battles to mark the 200th anniversary of the Battle of Waterloo that shaped the face of Europe, at a time when the continent’s unity is under threat.

European royals will attend a solemn memorial service on Thursday at the battlefield near Brussels where French emperor Napoleon Bonaparte’s dreams of European conquest were crushed by British and Prussian forces on June 18, 1815.

Nearly 200,000 spectators are also expected to flock to the site to watch a giant pyrotechnic concert on Thursday followed by two days of battle reenactments described as the largest of their kind in the world.

Waterloo still raises sensitivities in France and organisers are treading carefully to paint the event as a celebration of a modern continent joined together by the 28-nation European Union after centuries of war.

“The idea is to use this occasion to send a message of reconciliation and unity,” said an official in the cabinet of Belgian Prime Minister Charles Michel, which is organising Thursday’s commemorative ceremony.

In Britain, heir to the throne Prince Charles and his wife Camilla will attend a special service at St Paul’s Cathedral in London along with descendants of men who fought at Waterloo.

The events mark a pivotal moment in European history, when around 93,000 French troops led by Napoleon faced off against 125,000 British, German and Belgian-Dutch forces commanded by the Duke of Wellington and Marshal Bluecher.

Wellington would later describe that damp overcast day as “the nearest-run thing you ever saw in your life”.

Ten hours of bitter fighting, often hand-to-hand, left more than 10,000 people lying dead on the battlefield of Waterloo and 35,000 wounded, thousands of whom later succumbed to their injuries.

Finally defeated by an alliance of monarchies determined to end years of European war following the 1789 French Revolution, Napoleon was exiled to the island of Saint Helena in the south Atlantic Ocean, where he died in 1821.

After the battle the victors redrew the map of Europe and the continent enjoyed almost a century of relative peace until the carnage of World War I tore it apart again between 1914 and 1918.

But in Europe the past, as they say, is never dead and it is rarely even past.

The Waterloo celebrations take place against a backdrop of turmoil in Europe, from the Greek debt crisis that threatens to undo the eurozone, to the confrontation with Russia over Ukraine.

Meanwhile tensions have spilled over in the run-up to the anniversary, with Belgium this month minting a special 2.5-euro coin to mark the battle after France forced it to scrap a two-euro coin saying it would cause an “unfavourable reaction in France”.

Paris however denies that its decision to send only its ambassador to Belgium to the ceremony marking the start of the battle at 0900 GMT on Thursday is not a snub, pointing out that Germany is doing the same.

Their low-key emissaries contrast with other members of the guest list including the Belgian king and queen, the Grand-Duke of Luxembourg and the Duke of Kent, the cousin of Britain’s Queen Elizabeth II.

On Wednesday, Britain’s Charles and Camilla will attend the opening ceremony of the renovated Hougoumont Farm, where allied soldiers spent hours fighting off a French flanking manoeuvre.

In Belgium, the main event on Thursday will however be a huge sound-and-light show called “Inferno” after a Victor Hugo poem about the battle.

“I will bring the imperial tent, furnished and with a full dining set, to Waterloo in a trailer,” said Frank Samson, a Parisian lawyer who has donned the famous bicorne hat to play Napoleon for the last 12 years.

The initial French attack will be re-staged on Friday night and then the allied response on Saturday. More than 60,000 spectators each day are expected to attend events that will feature 5,000 costumed history enthusiasts, 360 horses and 100 cannons.

“This will be the biggest re-enactment of the Napoleonic era ever, anywhere in the world,” said director Etienne Claude, who has spent 18 months working on a project with a budget of around 10 million euros ($11.3 million).