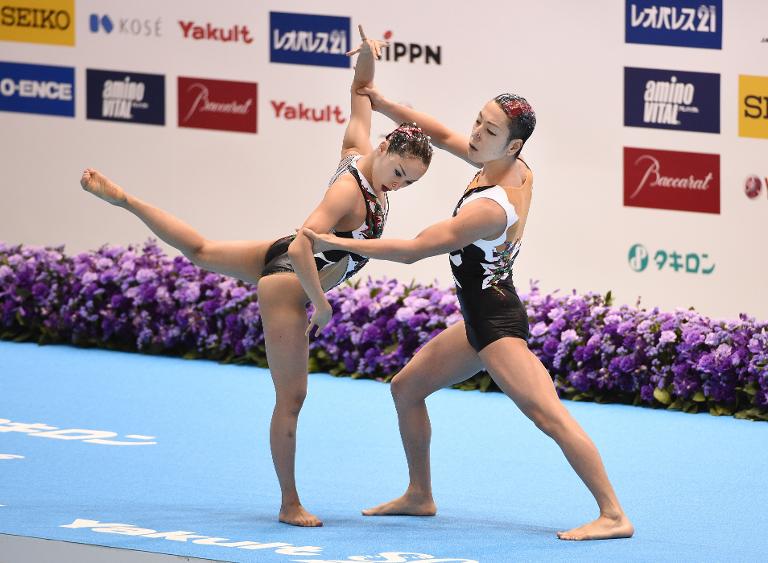 Japan’s top male synchronised swimmer Atsushi Abe has been likened to an old lady for slapping on too much make-up and described as “Dracula with a bad haircut” — and that’s just by his coach.

But bad hair days and coagulating mascara are only part of the problem for the 32-year-old as he prepares to represent his country in the mixed-gender duet at the swimming world championships, which begin in Russia next month.

Abe, who took up the sport after watching the hit Japanese movie “Waterboys” about a group of schoolboys who start a synchronised swimming team, is acutely aware of how important it is to win over sceptics after the swimming’s world governing body FINA voted to allow men to compete.

“There have been many male synchronised swimmers in the past who weren’t able to make it into the sunlight but diligently battled on regardless,” Abe told AFP after training with partner Yumi Adachi.

“Mixed duet has been introduced at the world championships and I want to show my deep gratitude to those swimmers who went before me. It’s because of them that men have been accepted into synchronised swimming and now as a comrade I want to help grow the sport.”

Abe is mindful that Russia was one of the most vocal opponents of letting men in, with swimmers and even government ministers blasting a decision which could threaten Russia’s stranglehold on a sport in which it has swept every Olympic gold medal this century.

It also jars rather awkwardly with the traditional image of masculinity the Russian government vigorously promotes.

“I think more men will come into synchro and I have a duty to help them feel it’s not out of their reach and that anyone can do it,” added Abe. “I’m aware it’s important to cooperate with foreign athletes to attract as many men to the sport as possible.”

However, he still has plenty of work to do.

“Breathing,” Abe says with a wry smile when asked about the hardest part of bobbing upside down wearing a nose peg while executing a lung-busting array of elements, from the side fishtail to the egg-beater.

“Practising the elements is fine, but when we put them together I’m still running out of puff. We’re increasing our stamina training and people have said we’re improving, but clearly there’s still some way to go.”

And then there’s the hair — hastily cropped short after taking the pair’s “Phantom of the Opera” routine a touch too literally.

“Oh God, that hair!” cried Abe’s coach Masami Hanamure, referring to a flood of negative feedback over his bouffant backfire at the Japan nationals last month.

“We were going for a sort of cute Dracula look so he grew it out and greased it back,” she winced. “It was awful and bombed spectacularly so we sent him off to get a haircut, poor thing.”

As if hair and cosmetic disasters were not bad enough, Abe caught more flak for a wardrobe malfunction in Tokyo when his costume made it difficult to tell him and Adachi apart.

“It looked like there were two girls in the pool,” sighed Hanamure. “We’re groping in the dark to be honest. His make-up made him look like an old woman. Maybe it’s best to have him wear just trunks to show off his muscles — but then he isn’t as buff as (American) Bill May so he’ll have to hit the gym.”

Abe, who spends 10 hours a day in the pool and eats his way through over 3,000 calories daily to bulk up, refused to let his coach’s gentle-natured ribbing get him down.

“It’s a process of trial and error,” he said. “We’re fumbling for the right formula and the right balance of masculinity. I had no idea my make-up looked effeminate. I’m no expert but we want to stress the difference between the genders in the water so I’ll have to do my homework.”