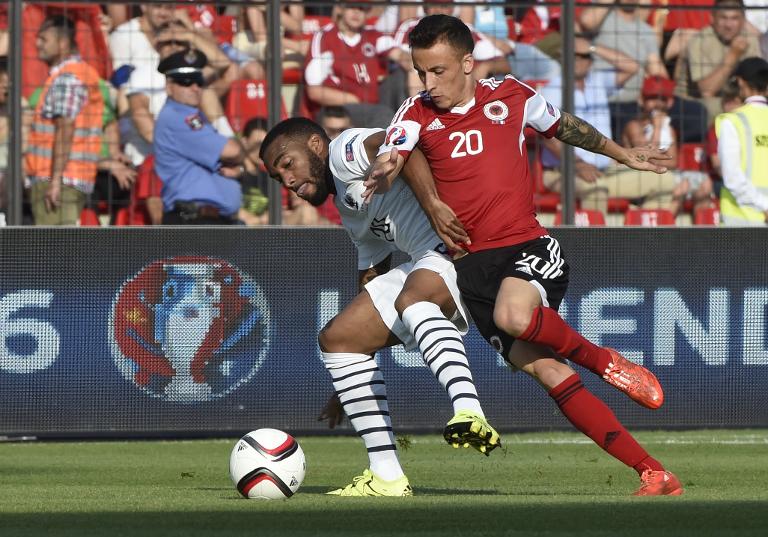 Lacklustre France suffered another disappointing friendly defeat on Saturday as the Euro 2016 hosts went down 1-0 to Albania in the city of Elbasan, prompting an angry response from veteran defender Patrice Evra.

A first-half free-kick by Ergys Kace gave Albania victory over the side they previously held to a 1-1 draw in Rennes back in November, as France lost for the second time in a week after losing 4-3 at home to Belgium last Sunday.

It is the first time that France have suffered back-to-back defeats since losing to Brazil and Uruguay on a tour of South America in June 2013 and full-back Evra did not hold back in his assessment of the performance.

“We represent a country. You can mess up a pass or a touch but you can’t lack desire. We got into the habit of working hard at the World Cup, we showed a good side to the French people, desire and respect for the shirt, and we have lost all that in recent matches,” said the Juventus defender.

Evra, who was stripped of his captaincy after the fiasco of France’s 2010 World Cup campaign, added: “We must not hide, we must accept the criticism because it is deserved.

“Sometimes we don’t know how lucky we are. How many players would like to be in our place?

“Some people will see that it was hot, that it was Albania, but it is a lack of respect to the French national team.

“We have got a bit too comfortable. I am not worried but we need to watch out. The Euros are in one year, not four. We need to shut up and get down to work.”

Les Bleus coach Didier Deschamps rotated his squad for the game played in sweltering late afternoon conditions, with the ill Paul Pogba among those missing from the away line-up.

Seven changes were made to the team well beaten by Belgium at the Stade de France as the likes of Liverpool defender Mamadou Sakho, Monaco midfielder Geoffrey Kondogbia and Lyon striker Alexandre Lacazette — scorer of 27 goals in Ligue 1 in the season just finished — were handed starts.

But they lacked any appetite against one-time minnows Albania, now coached by the Italian Gianni De Biasi and who are unbeaten in Euro 2016 qualifying so far, with the exception of their match in Serbia which was awarded as a 3-0 home win following trouble in Belgrade.

The French side who appeared desperate for their summer holidays to begin and Hugo Lloris made a crucial save from Ermir Lenjani before the goal that decided the game arrived in the 43rd minute.

Kace, the tiny 21-year-old with Greek club PAOK, curled a superb free-kick from 20 yards high into the top left-hand corner of the net to give Lloris no chance.

“This evening there was an opponent with more determination who were well organised and we were unable to find the solution,” said Deschamps.

“I am especially angry and disappointed because I am responsible. I choose the players, the system, decide who comes on and who goes off.

“I will take the time to analyse it but it has not been a favourable period for us,” added Deschamps, whose team are next in action away to Portugal in Lisbon on September 4.

“Our victory is deserved. France have great quality but they lacked the determination to play. It was an end of season game,” said De Biasi, whose side are third in Euro 2016 qualifying Group I before their next match in Denmark in September.