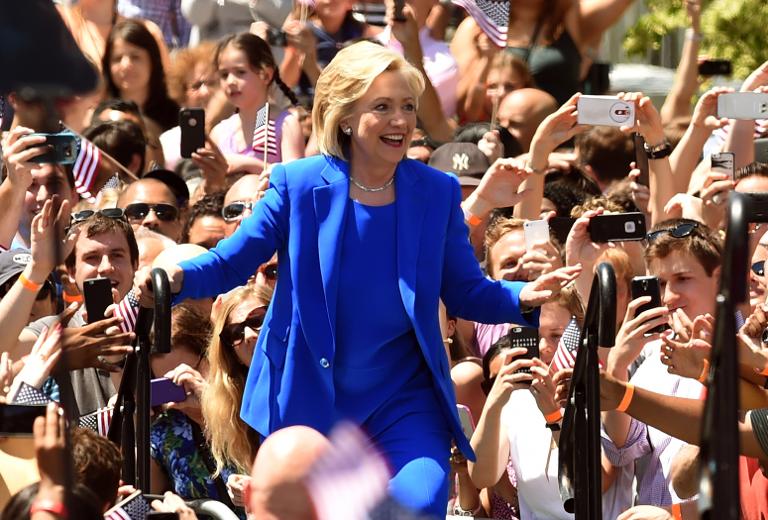 Hillary Clinton held the first major rally Saturday of her campaign to become the first woman president of the United States, promising a “better deal” for struggling middle-class Americans.

She chose home turf in New York, where she has a trenchant fan base and served as senator for eight years, to deliver a personal speech outlining why she was running again and to promise tax breaks and universal pre-school.

Several thousand of her most devoted admirers braved scorching heat and a strict security cordon to pack a relatively small venue at a memorial to famed World War II and New Deal president Franklin D. Roosevelt.

“I may not be the youngest candidate in this race, but I will be the youngest woman president in the history of the United States,” the 67 year old said to cheers and applause. “And the first grandmother as well!”

The former secretary of state was joined on stage by husband and former president Bill, daughter Chelsea and their son-in-law Marc Mezvinsky, embracing, holding hands and waving to a rapturous sea of waving flags.

With chants of “Hillary!” and whoops of delight, it was a festival of wholesome middle-class America, decked with red, white and blue flags, bordered by leafy trees and overlooked by the skyscrapers of New York.

She drew on the disadvantaged background of her mother, who was forced to work as a maid aged 14 during the Great Depression, to tell voters that she understood first hand their problems.

“My mother taught me that everybody needs (a) chance and a champion. She knew what it was like not to have either one,” Clinton said.

“Prosperity just can’t be for CEOs and hedge fund managers. Democracy can’t be just for billionaires.

The Democratic frontrunner for the 2016 race to the White House promised tax relief to small business owners, to lead the way in climate change, to make pre-school available to every child and lift “the crushing burden” of college debt.

She called for equal rights for all and promised to keep America strong, countering threats from Russia, North Korea and Iran, cyber attacks and from the Islamic State extremist group in Syria and Iraq.

She sought to present herself as warm, caring and relaxed, someone with a sense of humor and the most qualified candidate, with a raft of credentials learnt over four decades in public service.

Those at the venue lapped it up, but outside a small group of protesters held up banners denouncing her as a hypocrite, chastising her as out of touch, nepotistic and untrustworthy.

Clinton’s campaign, announced in April, has been clouded by criticism about her charitable work with the Clinton Foundation, paid speeches, private email accounts and her record as secretary of state.

A CNN poll found last week a growing number of Americans say she is not honest and not trustworthy (57 percent, up from 49 percent in March).

In her speech, she launched a stinging attack on the Republican Party, painting her conservative foes as out of touch and lampooned their tax breaks in favor of the super wealthy, at the expense of the middle class.

Republican National Committee spokeswoman Allison Moore denounced the speech as “chock full of hypocritical attacks, partisan rhetoric and ideas from the past that have led to a sluggish economy.”

Progressives on the left welcomed her proposal for debt-free college and said her words showed that the center of gravity in the Democratic Party was moving away from corporate priorities toward populist ideas.

“But Americans need to see specifics. We need a Democratic nominee ready to take on the powerful financial interests that keep our economy down,” said Adam Green from the Progressive Change Campaign Committee.

“It’s got to get better,” he told AFP. “She’s just not motivating people. She’s an analytical speaker, not an inspirational speaker.”

Cash, who is also a photographer, said he has sold pins for decades, but that civil rights campaigner Jesse Jackson, Bill Clinton and Barack Obama — who saw off Hillary Clinton last time around — all whipped up such fervor that his merchandise flew off the shelves.