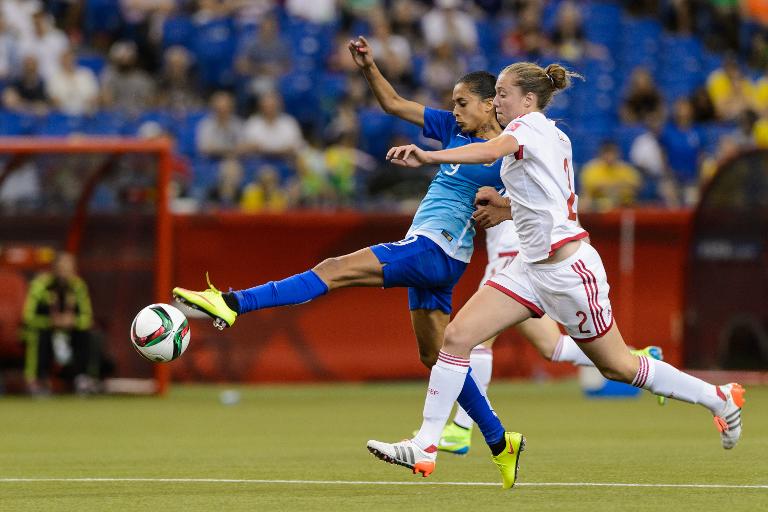 Brazil advanced to the last 16 of the Women’s World Cup on Saturday with a hard-fought 1-0 win over Spain as France fell 2-0 to Colombia in the first upset of the tournament.

France’s defeat threw Group F wide open as rivals England rekindled their campaign with a 2-1 win over Mexico in Moncton.

Andressa Alves got Brazil’s only goal in Montreal as they joined defending champions Japan in the knock-out round with one game to spare.

Brazil’s Marta failed to add to her record World Cup tally of 15 goals, as the star of the night was Alves, who scored two minutes before the break to keep the 2007 runners-up unbeaten.

“We didn’t score big but we won the game. It’s good for us to know we’re in the next round,” said Brazil coach Vadao whose side are top of Group E with six points from two games.

Costa Rica are second in Group E with two points after snatching a 2-2 draw with South Korea, and next play Brazil on Wednesday.

Spain and South Korea both have one point.

In Moncton, Lady Andrade and Catalina Usme lifted Colombia to an historic 2-0 win against France, among the tournament favourites.

Third-ranked France had been bidding to seal their last 16 berth after a 1-0 win over England, but must now wait until the final game in a tight Group F.

Colombia, ranked 28, moved top with four points from two games, with France on three along with England who beat Mexico 2-1 on Saturday.

The Mexicans have one point.

“Now we have to explode Mexico,” said France striker Gaetane Thiney of their final group game.

“We have to pump up the volume and leave everything out there. It’s a make or break World Cup tie.”

There was heartbreak for South Korea in Montreal as Karla Villalobos’ late equaliser denied the Asian side a first World Cup win.

Forward Melissa Herrera had gotten Costa Rica off the mark on 17 minutes, with the 18-year-old’s shot being confirmed by goal-line technology.

Korea equalised when Ji So-Yun converted a 21st-minuted penalty after Kwon Hah-Nul was fouled in the box by midfielder Cristin Granados.

And the Koreans led minutes later when Kang Yu-Mi delivered a perfect cross from the right allowing Jeon Ga-Eul to glance home a header.

“We did not lose but had an equaliser at the end so the atmosphere is as if we’ve lost,” said Yoon whose side had dominated for long periods.

“It’s a shame because there were many Korean fans cheering for us. We need to give our absolute best to pull everything out in our last game with Spain.”

Kirby scored their first goal of the tournament on 71 minutes with late substitute Carney getting the second eight minutes from time.

Substitute Fabiola Ibarra got one back for the Mexicans one minute into injury time after England goalie Karen Bardsley spilled a shot.

“I’m not only pleased with the impact of the substitutes but with the group. I’m disappointed though that we conceded a late one,” said Sampson as England bid to better their previous best of three quarter-final finishes.

But Colombia’s Andrade warned: “We’ll continue surprising I’m sure. We’ve evolved in our mindset and are now thinking big.”

Sunday will be a rest day at the women’s tournament in Canada before group matches continue on Monday.