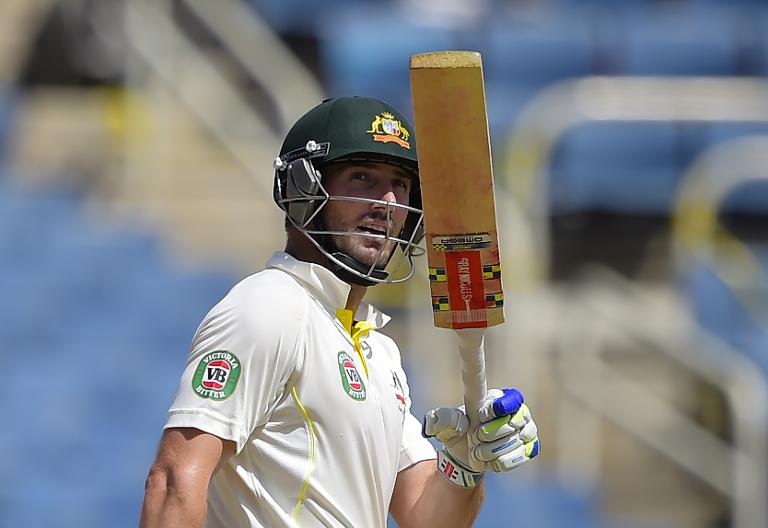 David Warner and Shaun Marsh compiled an opening stand of 117 to put Australia in a commanding position at 137 for one, an overall lead of 316, at tea on the third day of the second and final Test against the West Indies on Saturday.

Starting with a healthy first innings advantage of 179 after the home side were dismissed for 220 an hour into the day, Warner and Marsh weathered early probing spells from fast bowlers Jerome Taylor and Kemar Roach just before lunch and pressed on the accelerator in the afternoon.

Warner, who had endured a run of low scores in three previous innings in the series, was first to the half-century mark but fell for 62 via a miscued pull off Roach which offered wicketkeeper and captain Denesh Ramdin a comfortable catch.

Marsh will resume after tea on 59 alongside Steve Smith (eight not out), whose Test-best 199 was the foundation of Australiaâ€™s first innings total of 399.

Jason Holder blazed an unbeaten 82 at the start of the day to ensure that the West Indies avoided the indignity of the follow-on.

With the home side in deep trouble at 143 for eight overnight, Holder stole the spotlight with a brilliant, counter-attacking innings.

He belted 12 fours and two sixes, the second of the towering hits taking him to his second Test half-century, off just 63 deliveries.

He seemed well on course for a second hundred at the highest level of the game.

However Josh Hazlewood wrapped up the innings with the wickets of Roach and Taylor in the space of three deliveries to finish with his best Test innings figures of five for 38 off 15.5 overs.

Roach, who partnered Holder to the middle at the start of play after Veerasammy Permaul was dismissed off the last ball of the second day, played sensibly in a 77-run ninth-wicket partnership with his fellow Barbadian.

He contributed just seven runs but his defiance for 55 minutes during which he faced 36 deliveries allowed his fluent partner to enhance his already growing reputation as a batting all-rounder.

Seven weeks after a maiden Test hundred, a defiant unbeaten 103, saved the West Indies from defeat in the first Test against England in Antigua, Holder showed the more attacking side to his batting repertoire, most of his boundaries coming from fluent drives and extravagant slashes through the off-side.

Another hundred looked his for the taking until Hazlewood was summoned by Michael Clarke for a second spell.

The bowler responded immediately by drawing Roach into edging a drive to wicketkeeper Brad Haddin and then trapping Taylor palpably lbw when the last man offered no shot to his second delivery.