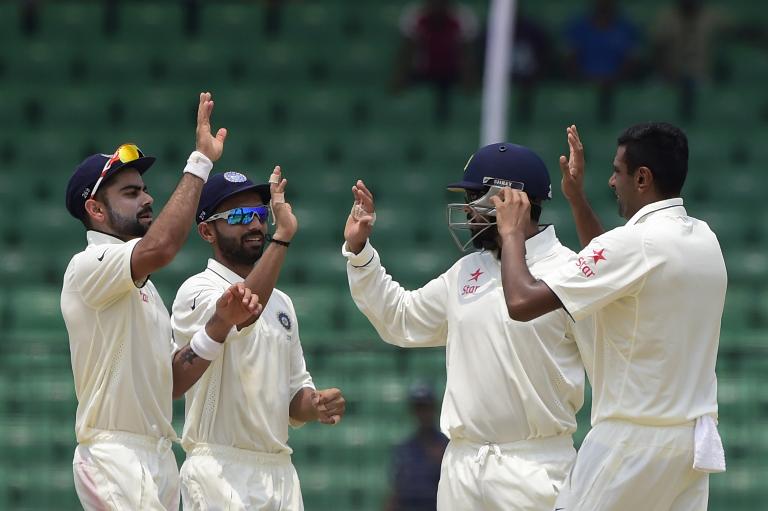 Ravichandran Ashwin grabbed a five-wicket haul as India enforced the follow-on before the rain-ruined Test against Bangladesh ended in an inevitable draw in Fatullah on Sunday.

After the entire morning session was washed out, India bowled out Bangladesh for 256 in their first innings to gain a lead of 206 runs over their own effort of 462-6 declared.

Given 30 overs to bat a second time, the hosts were 23 without loss after 15 overs when both sides agreed to call off the match at the Khan Shaheb Osman Ali stadium.

Ashwin and fellow off-spinner Harbhajan Singh shared eight wickets to lead India’s brave bid to win a match in which bad weather interrupted play on all five days. The entire second day was washed out.

The duo took centre-stage after Shikhar Dhawan (173) and Murali Vijay (150) had shared an opening partnership of 283 and Ajinkya Rahane made 98 after India had won the toss and elected to bat.

For Bangladesh, star all-rounder Shakib Al Hasan picked up four of the six wickets before opener Imrul Kayes top-scored with 72 and debutant Litton Das made 44.

Indian captain Virat Kohli saw his team slip from third to fourth place in the official rankings behind South Africa, Australia and New Zealand because of the draw.

“It was disappointing for both teams,” he said. “We would have liked to have five days of cricket. But whatever time we had on the field, the boys had top intensity and put in a really good effort.

“We had a really good time with the bat, especially Vijay, Shikhar and Rahane. It was a selfless performance to score quickly, knowing we won’t have too much time because of the rain.

“Ashwin and Harbhajan are quality spinners, so watching them bowl together is very pleasing for a captain. They put batsmen under pressure throughout.”

Kohli expects a tough fight in the three one-day internationals in Dhaka on June 18, 21 and 24.

“Bangladesh have shown they are a really talented side, especially in one-day cricket,” he said.

Bangladesh captain Mushfiqur Rahim said a 3-0 sweep of the one-day home series against Pakistan in April would leave his team in good stead.

“The one-day squad is looking pretty good, but this is a strong Indian side,” he said. “We played well against Pakistan, so hopefully we will get confidence from that.”

When play started after lunch on the final day, Bangladesh added 10 runs to their overnight score of 111-3 before Ashwin broke through by having Shakib caught behind by Wriddhiman Saha for nine.

Saha was in action again when he stumped Kayes off Harbhajan, before Soumya Sarkar was bowled by Varun Aaron to make it 176-6.

Shuvagata Hom added 43 for the seventh wicket with Das, who fell six short of a half-century on debut when he became Ashwin’s fifth victim through another catch by Sharma.

Tamim Iqbal (16) and Kayes (seven) played out time in the second innings before the game ended.