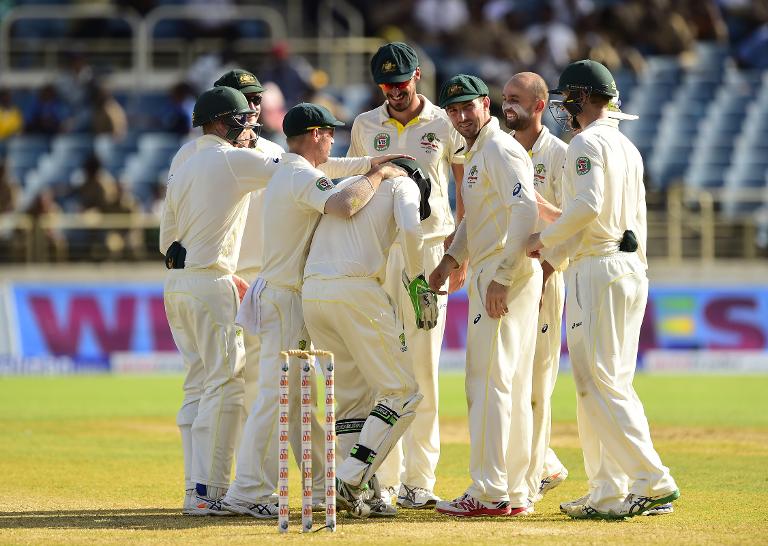 West Indies slumped to 143 for eight in reply to Australia’s first innings total of 399 following an eventful second day of the second and final Test, highlighted by Steve Smith missing out on a double-century by just one run.

In the second half of the day though it was Nathan Lyon’s off-spin that brought him three wickets as first-change bowler, pushing him ahead of Hugh Trumble as Australia’s most successful Test off-spinner ever with 144 victims.

“This was a much more helpful wicket than (the first Test) in Dominica,” said Lyon.

“You just had to bowl in the right areas and be patient. There was always something likely to happen.”

Pacer Josh Hazlewood also claimed three scalps, including Jermaine Blackwood for a top score of 51, in another typically miserly effort.

Two wickets in the last two overs of the day left the West Indies in an almost hopeless situation needing another 56 runs just to avoid the follow-on.

Having provided the foundation around which his team’s total was built, vice-captain Smith became only the third Australian and eighth overall in the 138-year history of the traditional format to be dismissed for 199 in a Test.

He fell when Jerome Taylor, who finished with the outstanding figures of six for 47 off 25 overs, earned a leg-before verdict against the right-hander who had batted with great assurance for almost nine hours.

“It’s disappointing to have gotten so close because I’ve never even managed 200 in a first-class match,” said Smith in reflecting on his near-miss.

“More importantly though we’re in a great position and it’s really up to the captain (Michael Clarke) to decide what he wants to do if they don’t get past the follow-on.”

After featuring in a record-equalling tenth-wicket stand of 97 with debutant Adam Voges in the nine-wicket first Test win in Dominica a week earlier, the tailenderâ€™s promotion by one spot in the batting order proved beneficial.

He contributed 24 to a 63-run ninth-wicket stand with Smith and was last out, giving Veerasammy Permaul his only wicket of the innings in the left-arm spinnerâ€™s 35th over.

Australia then wasted no time in exposing an inexperienced and vulnerable West Indies batting order.

Debutant Rajendra Chandrika edged an attempted drive at Starc to wicketkeeper Brad Haddin before he had scored and Lyon, surprisingly brought on as a the first-change bowler, responded to the challenge by bowling the other opener, Kraigg Brathwaite and then trapping Darren Bravo lbw.

Taylor had made good use of the second new ball at the start of the day in completing the fourth five-wicket innings haul of his Test career and third on his home ground.

He bowled Shane Watson for 25 offering no shot and then dispensed with Haddin, whose defence was breached after he had raced to 22 off 23 deliveries.

During the course of his innings Haddin became just the fourth player to compile 3,000 Test runs at number seven in the batting order.

Interestingly, the other three were his predecessors as Australian wicketkeeper-batsmen -â€“ Adam Gilchrist, Ian Healy and Rod Marsh.

Kemar Roach shrugged off his inconsistent and expensive effort on the first day to claim the wicket of Mitchell Johnson when Bravo held on to the head-high catch at first slip and Jason Holder accounted for Starc, raising the prospect of the West Indies finishing off the Australian innings before lunch.

However Smith found a resolute partner in Hazlewood, who was aided by a second wicket-taking no-ball indiscretion from Roach.