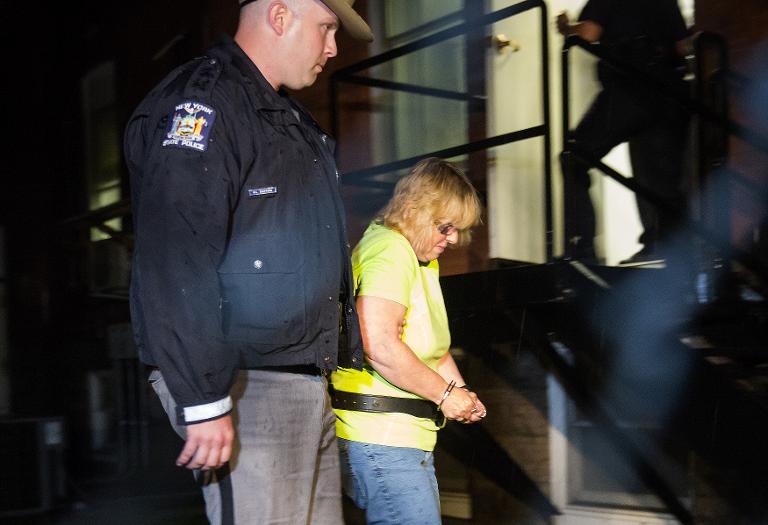 More than 800 state, local and federal agents combed thick woods east of the maximum-security jail where Richard Matt, 49, and David Sweat, 35, used power tools to cut their way to freedom.

Investigators have focused on the probability that Matt, who was convicted of dismembering his 76-year-old former boss, and Sweat, who shot dead a sheriff’s deputy, had inside help in pulling off last Saturday’s escape.

Joyce Mitchell, 51, who worked at a prison tailoring shop, was arrested and charged with “promoting prison contraband” and criminal facilitation.

Handcuffed and visibly nervous, Mitchell appeared in court late Friday dressed in a lime-green T-shirt and wearing black-rimmed spectacles, standing next to her lawyer in a brief arraignment.

Her lawyer entered a plea of not guilty and she was remanded into custody until Monday.

Her arrest was “one large piece of the puzzle” in the hunt for the duo, Major Charles Guess of New York State Police told a press conference.

“We have a message for David Sweat and Richard Matt. We’re coming for you and we will not stop until you are caught,” he added.

Media reports have said Mitchell’s husband, another prison employee, is also being investigated for possible involvement in the prison break.

Hacksaw blades, drill bits and two pairs of spectacles with attached lights were among the items that his wife allegedly gave the convicts, CNN quoted two unnamed law enforcement sources as saying.

Officials suggest that Mitchell was charmed by Matt and Sweat, and agreed to pick them up by car from the manhole where they emerged.

Instead, she changed her mind and checked into a hospital — reportedly suffering from a panic attack.

The Wall Street Journal reported that Mitchell had also been under investigation in the last year for allegedly forming a relationship with Sweat while they worked together in the prison tailoring shop.

Police said wet weather and the rolling woodlands where the search is focused were complicating the effort — but also worked against the pair.

“If they have not escaped the area or they have not availed themselves of shelter, we’ve got to assume they’re cold, wet, tired and hungry,” Guess told reporters.

“I would advise and remind the community and the residents that that makes these individuals even more dangerous and desperate.”

Authorities “do not have any conclusive evidence that either of the inmates has left this area,” he added.

Police said they were continuing the search along state highway 374, a portion of which has been closed, in addition to the closure of local schools. They added that officers were chasing more than 700 leads.

One local newspaper, the Press-Republican, said dogs had picked up the convicts’ scent on Wednesday and traced it from outside a convenience store and gas station through the woods.

There is a $100,000 reward for information leading to the murderers’ arrest, and the public has been warned to call 911 immediately if they spot anything suspicious and not to approach either man.

Matt, six feet (1.83 meters) tall with multiple tattoos, was serving a sentence of 25 years to life for the 1997 kidnapping and dismembering of his former boss in a 27-hour ordeal.

He fled to Mexico after the murder and killed an American, before being sentenced to 20 years and extradited back to New York.

The pair’s escape has been likened to Hollywood movies such as “The Shawshank Redemption” or “Escape from Alcatraz.”

After cutting through walls and crawling through an underground pipe system, the men left behind a note saying “Have a Nice Day.”