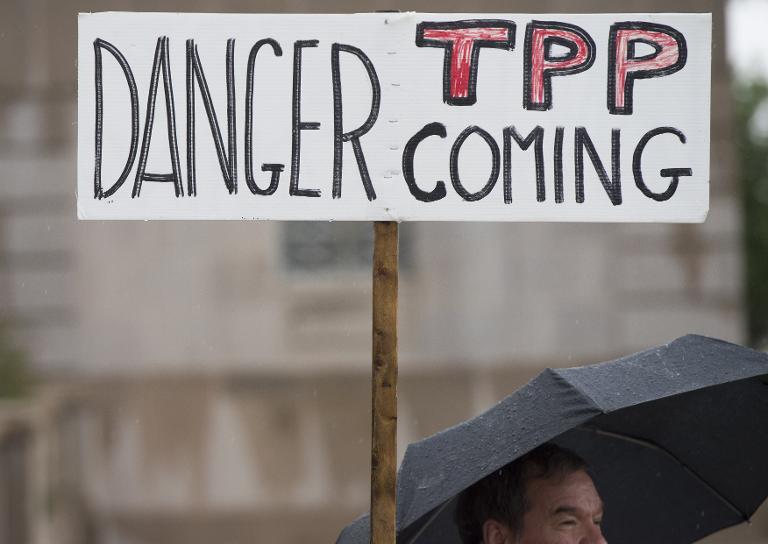 US lawmakers dealt a stinging blow Friday to President Barack Obama and his ambitious trade agenda, stalling a measure that would have given him fast-track authority to conclude a trans-Pacific trade accord.

The vote, in which two-thirds of the House of Representatives opposed a workers aid program in the trade package, marked a defeat for the president, who had personally come to Capitol Hill earlier in the day in a failed bid to persuade fellow Democrats to back him.

Immediately afterwards, the House actually passed the bill that would give Obama “Trade Promotion Authority” (TPA) to rapidly conclude the Pacific trade deal and send it to Congress for an up-or-down vote.

But it was merely a show vote because the rejection of the workers aid measure automatically put the brakes on TPA.

Both measures passed the Senate as a package; if either of them fails in the House, neither reaches the president’s desk.

A bruised Obama urged the House to vote again “as soon as possible” so US businesses can “sell goods made in America to the rest of the world,” while his spokesman Josh Earnest cast the failure as “another procedural snafu.”

House Majority Leader Kevin McCarthy told reporters he was “disappointed” in the result and warned Democrats it was time to “seriously rethink” their position ahead of a possible new vote on the measure next week.

“We need to finish this job,” McCarthy said.

“While we have not had this authority, there have been 100 agreements, and America has been a part of zero.”

TPA would allow Obama to finalize negotiations with 11 other Pacific Rim countries on what would be the largest trade agreement ever, a massive pact with Japan, Australia, Canada, Chile, Vietnam and others encompassing some 40 percent of global commerce.

His own Democrats, though, stood in the way.

“We need to slow this fast track down,” top House Democrat Nancy Pelosi, a longtime Obama ally, told members, revealing a position that she had kept private for weeks.

“Whatever the deal is with other countries, we want a better deal for America’s workers,” she said.

“Our people would rather have a job than trade assistance,” Pelosi said of the workers-aid program, known as Trade Adjustment Authority. “Its defeat, sad to say, is the only way that we will be able to slow down the fast track.”

In a letter to members after the vote, she urged Republicans and Democrats to craft a new trade package with stronger labor rights and environmental protection.

House Speaker John Boehner immediately re-introduced the worker-aid bill, which according to aides gives him 48 hours to bring it back to the floor for a fresh vote.

“The president has some work yet to do with his party to complete this process. This isn’t over yet,” House Ways and Means Committee chairman Paul Ryan said.

Republicans signalled they were prepared to regroup rather than abandon efforts to update America’s trade policy, and the White House insisted the process was salvageable and encouraged legislators to discuss the path forward.

After their closed-door meeting with Obama earlier Friday, several Democrats insisted they would hold their ground, even after the president urged them to “play it straight” and vote their values on worker assistance.

Angry Democrats said they felt the workers’ aid program, Trade Adjustment Assistance (TAA), traditionally backed overwhelmingly by their party, was being used to lure lawmakers to vote for TPA.

Congressman Brad Sherman said Obama gave an “eloquent” defense of the fast-track bill, but the California Democrat and much of his caucus were not swayed.

“Obviously he thinks that this trade deal will help the American economy and help working families. The vast majority of Democrats — and 100 percent of all those organizations of working people — disagree,” Sherman said.

The AFL-CIO, America’s largest umbrella labor group, applauded the House for having “done the right thing.”

Trade is likely to remain a headline issue through the 2016 presidential campaign.

Senator Bernie Sanders, who is challenging Hillary Clinton for the Democratic nomination, hailed the vote as “a victory for America’s working people” and a “defeat for corporate America,” which he accuses of outsourcing millions of jobs.

Clinton has remained publicly neutral on the trade debate.