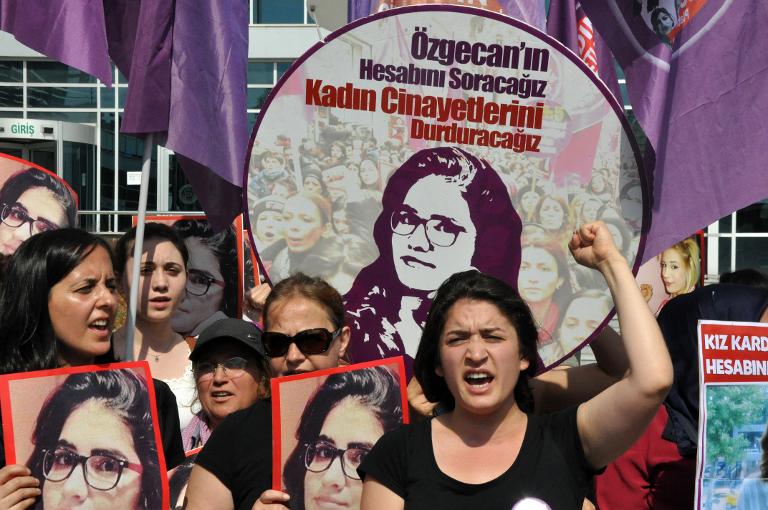 Three men went on trial in Turkey on Friday over the murder and attempted rape of a 20-year-old female student, in a case that sparked an outpouring of anger over the level of violence against women in the country.

Ozgecan Aslan was murdered in the southern region of Mersin in February while returning home from a shopping trip in a minibus.

The driver of the minibus, Ahmet Suphi Altindoken, 26, was arrested and charged with murder and attempted rape.

His father, Necmettin Altindoken, and a friend, Fatih Gokce, are charged with helping him cover up the crime.

In tearful and sometimes gruesome opening testimony, the younger Altindoken admitted killing Ozgecan by stabbing her in the neck. But he denied any sexual attack.

The term of an aggravated life sentence was brought in after Turkey abolished the death penalty in 2002 as part of its bid for EU membership.

Some public figures, including cabinet ministers, have suggested Ozgecan’s murderers should face the death penalty. But the government insisted it would never been reinstated.

All three suspects were present in court for the start of the trial in the city of Tarsus in Mersin province, Turkish television said.

Ahmet Suphi Altindoken is accused of driving the woman to a wood after all the other passengers had got off and then attempting to rape her.

Prosecutors said that the young woman fought back against using pepper spray and that Altindoken then bludgeoned and stabbed her.

Altindoken’s father and friend are accused of helping him burn the body and dispose of it in a riverbed.

To jeers from the public gallery, Altindoken claimed it was Aslan who started the fight, by provoking him when he tried to take a short cut.

Altindoken, who is married with a three-year-old child, was quoted by the Hurriyet website as saying he started punching and kicking Ozgecan Aslan several times until the young woman lost consciousness.

He said he then called Gokce for help, who suggested killing Aslan and cutting off her hands in an attempt to hide DNA evidence under her fingernails.

Altindoken alleged it was his friend who might have raped Aslan.

“After that I took the knife and stabbed her in the neck,” he said, covering his mouth and eyes with his hands and weeping.

“May God never let this happen to anyone,” he added.

The pair were later joined by Altindoken’s father, who helped them dispose of the body.

The prosecution showed a picture of Aslan’s burnt body and said the suspects had burnt the young woman’s genital area in an apparent attempt to destroy evidence of rape.

Gokce said it took three minutes for Altindoken to kill the young woman and that pools of blood could be seen around the minibus.

“There was blood everywhere and Suphi looked like a butcher,” he said, adding it was “too late” to intervene.

Gokce rejected claims he had raped Aslan, accusing the other defendants.

Necmettin Altindoken claimed his son had suffered mental problems for years, saying he once stabbed him during a pre-wedding ceremony.

In a show of solidarity with the victims of violence against women, some 1,000 lawyers requested to join the trial to represent Aslan. There was only space for around 100 inside the courtroom.

Hundreds of supporters also massed outside the courthouse, holding up pictures of the victim and demanding justice.

Turkish authorities acknowledge there is a grave problem of violence against women in the country, often involving wives killed by their husbands.

According to the non-governmental Platform to Stop Violence Against Women, 286 women were murdered in Turkey in 2014 and 134 so far in 2015.

In another shocking attack in May, a teenage Turkish woman who was competing in a nationwide televised song contest was shot in the head, allegedly by her ex-boyfriend. Mutlu Kaya, 19, remains in a coma.