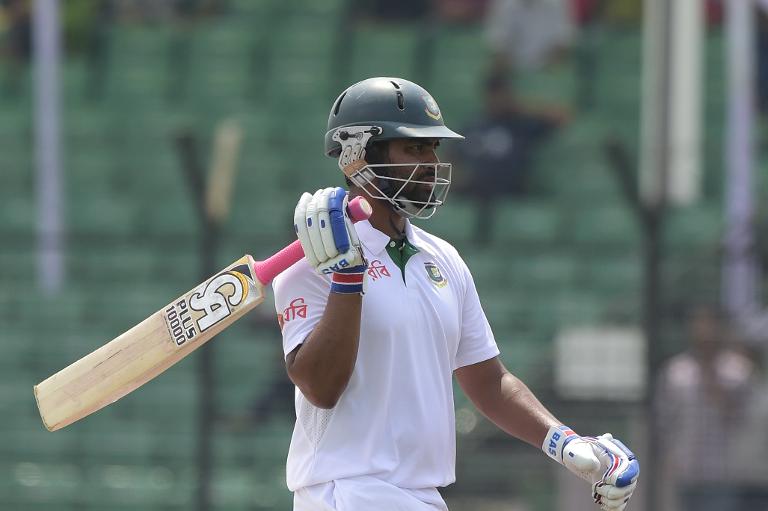 Tamim Iqbal became Bangladesh’s leading run-scorer in Tests as the rain-ruined one-off match against India lurched towards a draw on Saturday after bad weather disrupted the fourth day’s play in Fatullah.

India declared their first innings at their overnight score of 462 for six in a bid to force a result in a match in which just 103.3 overs were bowled over the first three days.

Bangladesh were 111 for three in 30.1 overs in reply at lunch before rain wiped out the remaining two sessions at the water-logged Khan Shaheb Osman Ali stadium.

With just one day left and not even two innings completed, only a dramatic Bangladeshi collapse will liven up play on Sunday.

Tamim, playing his 40th Test, moved to 19 before he was stumped smartly by Wriddhiman Saha off a delivery from spinner Ravichandran Ashwin, who shared the new ball with seamer Ishant Sharma.

Mominul Haque missed a chance to equal a world record when he was caught in the deep off Harbhajan Singh after making 30.

But Mominul still has a remote chance to join De Villiers if the hosts are required to bat a second time on Sunday.

Indian opener Shikhar Dhawan, who hit 173 in the match, laughed when asked what he expected from the final day’s play.

“According to the forecast, we expect more rain,” he said. “But if we get to play, it will be good for us and for the spectators too.

“If we had played a full game, we may have realised our aim to win the Test. But you can’t control the weather, so you can’t do anything about it.”

Tamim warned against taking a draw for granted, insisting that much could still happen if there was no more rain.

“The first half-an-hour will be very important,” he said. “If we can build a partnership, then we can safely say the Test is over.

“But cricket is a funny game and anything can happen. We are very relaxed because we know what we need to do and that is to build a good partnership.”

The Test will be followed by three one-day internationals in Dhaka on June 18, 21 and 24.