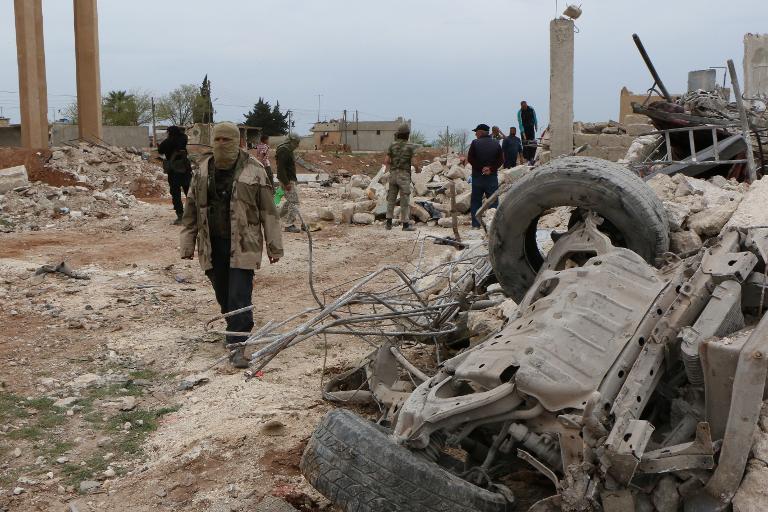 A Syrian rebel alliance has pushed Islamic State group jihadists further away from one of its key supply routes from neighbouring Turkey, a monitoring group said Saturday.

The Islamist rebels ousted IS from the village of Al-Bal, which it captured on Tuesday, threatening the Bab al-Salama border crossing, just 10 kilometres (six miles) away, the Syrian Observatory for Human Rights said.

Further south, the rebels were fighting to defend the town of Marea, on the road between the crossing and the rebel-held eastern sector of the main northern city of Aleppo.

Activists said the rebels were simultaneously launching their own attacks on IS positions in the area.

“The ultimate goal for IS is to cut off this crossing,” said Abdel Rahman.

Mamun Abu Omar, head of a local pro-rebel press agency, said “IS is trying to surround the town by occupying the villages all around it.”

The rebel alliance is fighting both IS and government forces in Aleppo province, which is one of the most complex battlegrounds of Syria’s multi-front civil war.

In some areas, it is supported by fighters of IS’s jihadist rival, Al-Qaeda affiliate Al-Nusra Front.

IS fighters control areas in the province’s east, and have been laying siege to the Kweyris military airport, still controlled by the regime.

Early Saturday, three government officers were killed when their helicopter was shot down by IS just outside the airport, Abdel Rahman told AFP.

“All three officers were killed, but it’s not clear if IS has taken the bodies,” he said.

The Observatory said Kurdish People’s Protection Units (YPG) had edged to within 10 kilometres (six miles) southwest of Tal Abyad, used by IS as a gateway from Turkey.

Backed by air strikes from a US-led coalition, Kurdish forces recaptured the flashpoint town of Kobane — which lies west of Raqa province — from IS in January.

Since then, YPG militia have chipped away at IS control along the Turkish border on both sides of Raqa.

According to the Observatory, the Kurdish fighters advancing from east and west aim to meet at Tal Abyad and lay siege to the town.