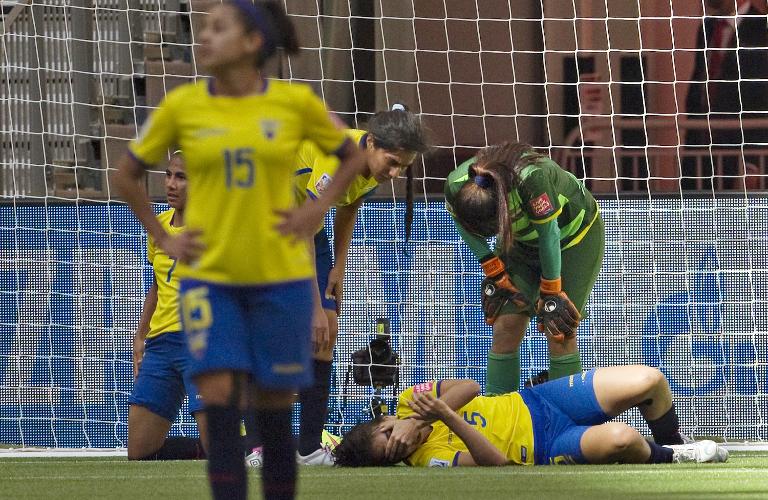 Switzerland condemned Ecuador to their second thrashing at the Women’s World Cup with a 10-1 defeat in their Group C clash in Vancouvery.

The South American newcomers, already beaten 6-0 by Cameroon in their opener, were no match for the Swiss, who bounced back with a vengeance from a 1-0 loss to Japan in their opener.

It was the first World Cup win for debutants Switzerland and the scoreline equalled the most goals in a match, set in 2007 when Germany whipped Argentina 11-0.

Despite the scoreline, Ecuador managed to peg the Swiss to just a single goal following an Angie Ponce own goal for most of the first half until they conceded a second to Eseosa Aigbogun just before the break.

Ecuador’s teen defender Ponce scored a hat-trick at the BC Place Stadium, but two of the goals, on 24 and 71 minutes, were own goals for the opposition.

The 18-year-old nevertheless got her country’s first World Cup goal when she converted a 64th-minute penalty awarded after Monica Quinteros was fouled inside the box by Swiss defender Rahel Kiwic.

Humm scored her first two minutes after the break to open the floodgates, and the five-minute hat-trick was the fastest ever in the women’s tournament.

“I don’t want to sound arrogant but I wasn’t happy with the first half,” said Swiss coach Martina Voss-Tecklenburg said.

“Maybe there was a feeling of superiority which is not so good. I was able to address that at half-time, but the opponent made it quite difficult for us in the first half.”

Bachmann scored two goals in little more than 60 seconds as Switzerland completed a five-goal haul within a 14-minute period just after the break.

“We kept on wanting to score goals because in the background this would be an advantage going forward,” said the Swiss coach.

In the final round of group games in Winnipeg next Tuesday, Ecuador come up against defending champions Japan with Switzerland playing Cameroon for a place in the last 16.