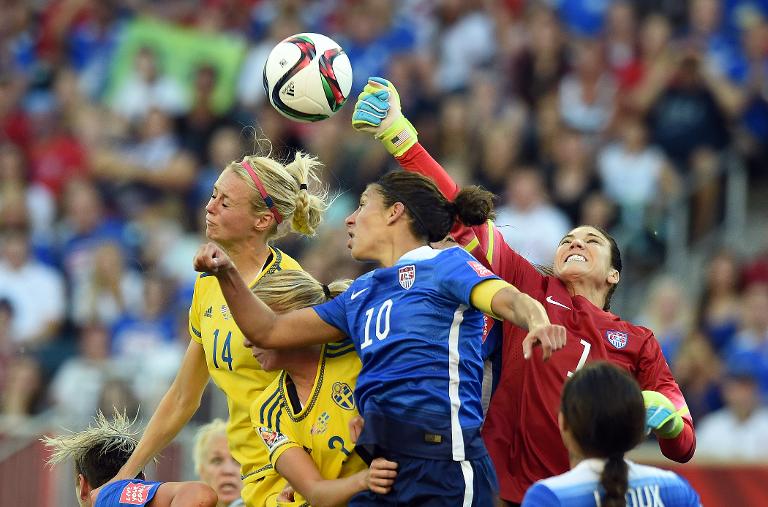 The United States, among the tournament favourites, were held to a goalless draw by Sweden as all remains to play for in their Women’s World Cup Group D.

The Americans, who started with captain Abby Wambach on the bench, were given a tough test by the Swedes, who played to a 3-3 draw with Nigeria in their opener.

Australia beat Nigeria in their Group D clash earlier on Friday thanks to two goals from Kyah Simon.

The United States lead the group with four points followed by Australia with three with Sweden on two and Nigeria bottom with one.

Wambach came on after 67 minutes, providing a lift for the Americans who played on front of thousands of fans who travelled the short distance over the border to Canada to support the 1991 and 1999 champions.

“I felt like we needed pace and mobility up top and Abby is comfortable and confident in any role,” said USA coach Jillian Ellis.

“In terms of just her leadership and her influences on our setpieces both sides of the ball she is a huge asset late in the game.”

Tension was running high for the first half hour with Sydney Leroux having the first real chance when she rose highest to latch onto a Morgan Brien cross into the box but was unable to finish off.

Carli Lloyd came close three minutes after the break but Hedvig Lindahl held firm, one of several fine saves which saw the Swedish goalkeeper voted player of the match.

Sweden came close to breaking the deadlock only for Meghan Klingenberg to clear Caroline Seger’s shot off the underside of the crossbar, with goal-line technology confirming.

The Americans continued to press forward but were unable to find a winner with a late Wambach header saved by Lindahl.

“We’re still in the driver’s seat and still have the chance to finish top, our focus now will be on Nigeria,” said Ellis.

“(Sweden) are big, strong and made space very limited for us. Did I expect that? No,” she admitted after sharing the points.

Sweden coach Pia Sundhage said her side were finding their momentum after being held in their opener by Nigeria.

“It was a tight game, after this 90 minutes we’ve gained some confidence,” said former US coach Sundhage.

“The opening game is a hard game, I don’t think we came up to our level.

“Today it was better, especially dealing with our defending and being tactically smart against one of the best teams in the world.

“Today we saw a battle and a tactical game.”

She continued: “If you look back at history Sweden has not played good in the first game and little by little we get better.

“The fact that we have one of the best goalkeepers in the world is an advantage and she showed that today.”

In Tuesday’s final round of group games in Vancouver’s BC Place Stadium the United States will play Nigeria while Sweden take on Australia in Edmonton as they bid for a place in the last 16.