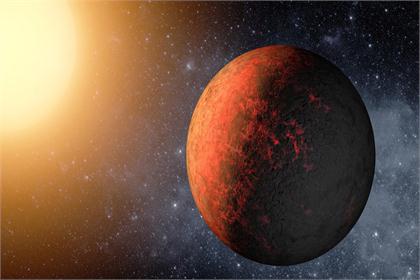 Washington: Using NASA’s Hubble Telescope, scientists have detected a stratosphere on a massive and blazing-hot exoplanet known as WASP-33b.

A stratosphere occurs when molecules in the atmosphere absorb ultraviolet and visible light from the star. This absorption warms the stratosphere and acts as a kind of sunscreen layer for the planet below.

The presence of a stratosphere can provide clues about the composition of a planet and how it formed. This atmospheric layer includes molecules that absorb ultraviolet and visible light, acting as a kind of “sunscreen” for the planet it surrounds.

Until now, scientists were uncertain whether these molecules would be found in the atmospheres of large, extremely hot planets in other star systems.

Some of these planets are so hot in their upper atmospheres, they’re essentially boiling off into space, said co-author Avi Mandell, adding that at these temperatures, they don’t necessarily expect to find an atmosphere that has molecules that can lead to these multilayered structures.

The team also presented the first observational evidence that WASP-33b’s atmosphere contains titanium oxide, one of only a few compounds that is a strong absorber of visible and ultraviolet radiation and capable of remaining in gaseous form in an atmosphere as hot as this one.

Understanding the links between stratospheres and chemical compositions is critical to studying atmospheric processes in exoplanets, said co-author Nikku Madhusudhan of the University of Cambridge, adding that the finding marks a key breakthrough in this direction.