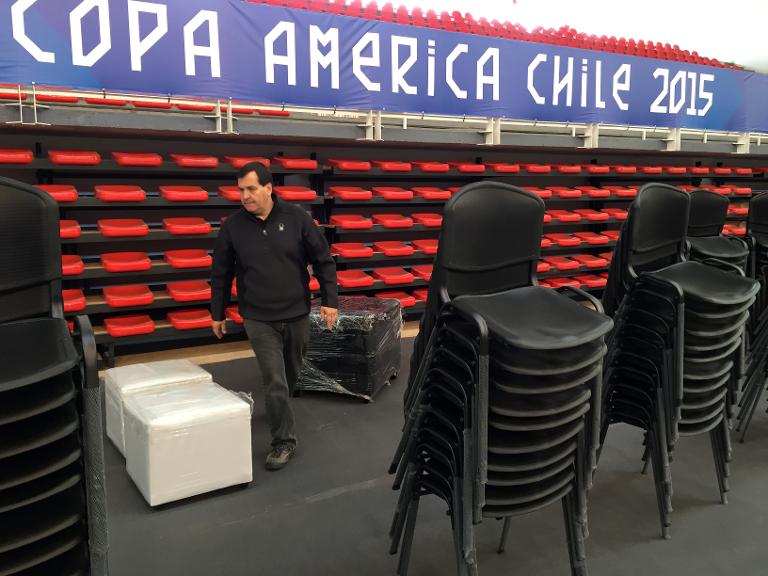 South America’s biggest football tournament is in full swing but the sport’s leaders are keeping a conspicuously low profile as the FIFA corruption scandal spreads fallout around the world.

Despite the presence of Lionel Messi and Neymar, a dark shadow hangs over the Copa America because of US charges against 14 football barons from North and South America over the payment of bribes worth more than $150 million.

Seven of the 14 are from South America — two each from Brazil and Argentina and one from Paraguay, Uruguay and Venezuela.

The Copa America was the main tournament at the centre of the bribes and the South American Football Confederation (CONMEBOL) has been left reeling.

No top CONMEBOL official held a press conference for the start of the tournament in Chile.

Only CONMEBOL president Juan Angel Napout and the heads of the Chilean and Ecuadoran federations attended Thursday’s opening match between Chile and Ecuador. Normally the VIP stand would be packed with powerbrokers from across the continent.

Chile’s President Michelle Bachelet pointedly did not sit close to the head of the Chilean federation Sergio Jadue.

According to the US indictment, all 10 of CONMEBOL’s national leaders were to receive bribes in return for a Copa America broadcasting deal. Jadue has denied any wrongdoing, and has not been charged.

Jose Antonio Prieto, a renowned sports analyst and commentator for Radio Cooperativa said it felt like all the football leaders were “hiding” at the Santiago opening ceremony.

“The leaders are scared, resentful and worried, Many have something to explain,” said Mariano Berges a former judge who runs the Buenos Aires based activist group Let’s Save Football, told AFP.

“Before everyone in the (football) family travelled first class, but now it is not appropriate to display that kind of behaviour. Nobody wants to be seen.”

Football is a religion across South America but many fans think the sports leaders have had a confession to make since seven FIFA officials were arrested at a luxury Zurich hotel on May 27.

Paraguayan deputies voted Thursday to lift the immunity from prosecution for the CONMEBOL headquarters in the country’s capital. The confederation’s building on the outskirts of Asuncion had enjoyed the same immunity as foreign diplomatic missions since it opened in 1997.

Investigators across South America are taking a hard look at football’s riches.

— In football superpower Brazil, police are investigating whether national laws have been broken, according to Justice Minister Eduardo Cardozo.

Jose Maria Marin, 83, a FIFA executive member and former Brazil football federation (CBF) president, was among those arrested in Zurich and now battling extradition to the United States. A Brazilian broadcasting executive, Jose Marguiles, 75, was also indicted by US authorities.

Former Brazilian international turned senator Romario has called for a government investigation to clear away corruption in football in the country.

Two Argentinian sports marketing executives, Alejandro Burzaco, 50, and Hugo Jinkis, 40, are on the US charge list. Burzaco escaped arrest in Zurich last month but handed himself over to Italian police this week.

— Venezuelan authorities raided the headquarters of the country’s football association and banned its president Rafael Esquivel from selling assets. Esquivel, 68, a CONMEBOL executive member, was arrested in Switzerland. His widespread property portfolio is now under investigation.

— Paraguayan Nicholas Leoz, 86, a former CONMEBOL president and FIFA executive member is under house arrest as he fights extradition to the United States.

— Uruguay’s President Tabare Vazquez has said the football scandal was “predictable.” Eugenio Figueredo, 83, a FIFA vice president and former CONMEBOL president and Uruguayan Football Federation president, is among those held in Switzerland.

Even the Roman Catholic church, dominant in South America, has expressed its disgust at the scandal. An educational charity launched by Pope Francis on Thursday stopped taking donations from South America’s football confederations.

Prieto, the sports analyst, said that normally the president of each country involved would be at the Copa America opening. Their absence this week, he said, was “sending a message.”