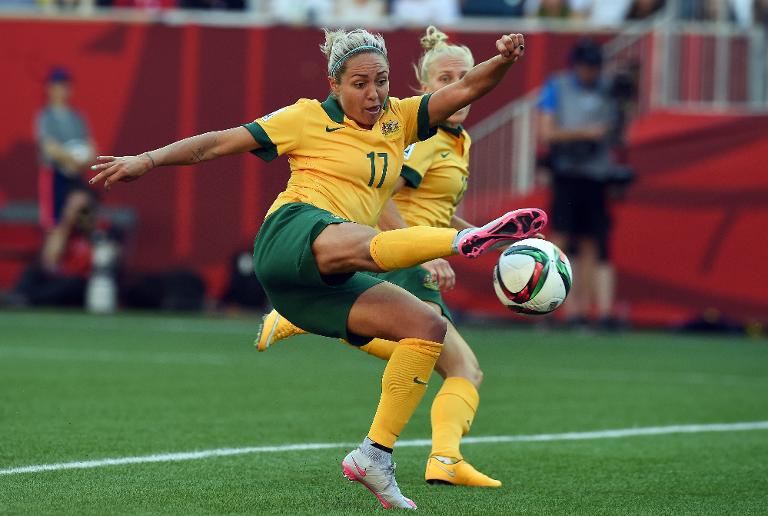 Goals in either half from Kyah Simon lifted Australia to a 2-0 win over African champions Nigeria in their second Group D match at the Women’s World Cup.

The 23-year-old Sydney FC striker, making her comeback from a career-threatening knee injury, found the net after 29 and 68 minutes at Winnipeg Stadium on Friday to give the Matildas their first win of the competition in Canada after their 3-1 opening loss to the United States on Monday.

The game finished in confusion when French referee Stephanie Frappart blew the whistle after less than a minute of extra time while the board indicated there would be four, to the disbelief of players, coaches and fans.

“A couple of minutes can made a difference to a side,” complained Nigeria coach Edwin Okon whose Super Falcons failed to reproduce the style they showed in their stunning comeback from two goals down to draw 3-3 with Sweden in their opener.

“We’re not happy with the officiating, but the referee is in charge of the game,” he added.

Australia now have three points after two games with Nigeria on one.

“It was a tough battle out there in the heat,” said Australia coach Alen Stajcic. “We were the most clinical side and those couple of key moments won us the game.”

Australia move to Edmonton for their final group game against Sweden, and Stajcic said: “There’s still a lot to be played in this group. Doing the maths we can still finish top of the group if the USA drop some points, we can still finish second, third or fourth if Nigeria beat USA.

“Anything can happen when you play Nigeria, they are such spirited, positive footballers.

“Everything is up for grabs still.”

Stajcic said he was proud of the resilience his side showed after their defeat to former two-time winners the United States.

“We were fairly bruised and battered after the American game,” he admitted.

“Laura Alleway was on crutches for two days and Lisa De Vanna for three and for them to come out today and play 90 minutes was fantastic.”

Stajcic said that apart from forward Sam Kerr, who was undergoing tests for a possible broken jaw following an elbow from Nigerian defender Ugo Njoku, all the team were in good fettle for Sweden.

“Our fitness was good until the end of the game. Rest and recovery is important. We’ve had four months to prepare, I’ll only tinker with the details now.”

Nigeria’s final group game will be against former two-time winners the United States.

Desire Oparanozie had looked dangerous for the Africans up front early on but her 19th-minute effort was off target.

But the breakthrough came when Australia captain Lisa De Vanna made a driving run through the opposition’s defence after half an hour to set up Simon who sent the ball over Precious Dede in goal.

A rattled Nigeria could have fallen further behind shortly after, but a Simon shot was blocked and De Vanna’s volley off the rebound fired just wide.

Australia goalkeeper Lydia Williams did well to block Oparanozie with a great sliding challenge at the edge of the box as Nigeria pushed forward.

Ngozi Okobi attempted a long-range volley to the delight of the fans but her effort flew high.

The Matildas doubled their lead when Simon picked up a Kerr cross, with Alleway denied their third by the crossbar in the final minutes.