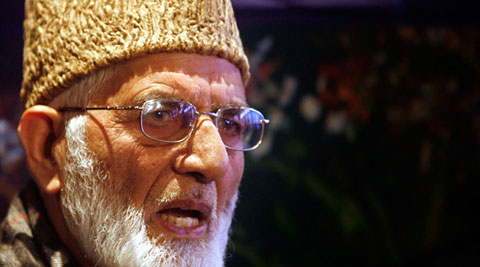 Srinagar:Â Several leaders of hardline Hurriyat Conference including chairman Syed Ali Shah Geelani were on SaturdayÂ put under house arrest by authorities to foil the plans of the amalgam to hold a controversial seminar on SundayÂ that was dubbed as ‘ant-national’.Â

A posse of policemen has been deployed outside the residence of Geelani and no one is allowed to enter or leave the premises, a spokesman of the Hurriyat said. The police action came even as Jammu and Kashmir government said it will not allow “anti-India” activities in the state.Â

A Hurriyat spokesman said MuhammadÂ AshrufÂ Sehrai, Ayaz Akbar and Raja Mehraj-ud-din were the others who were placed under house arrest on the eve of the planned seminar.Â

Police officials refused to confirm or deny the house arrest of the separatist leaders. Geelani, while condemning the move, said the government has shown intolerance even to peacefulÂ programmes.Â

“The government has completely buried the ‘Battle of Ideas’ slogan of the (Chief Minister) Mufti Mohammad Sayeed,”Â GeelaniÂ said in a statement. The Hurriyat has planned to hold a seminar to which several separatist leaders, including from Sikhs groups, and Christian community representatives have been invited.Â

“Hurriyat Conference has decided toÂ organiseÂ a seminar in Srinagar on June 14 in which people from different walks of life will express their views on the topic ‘How to Resist the Indian State Fascism’,” a spokesman of the separatist amalgam said earlier this week.Â