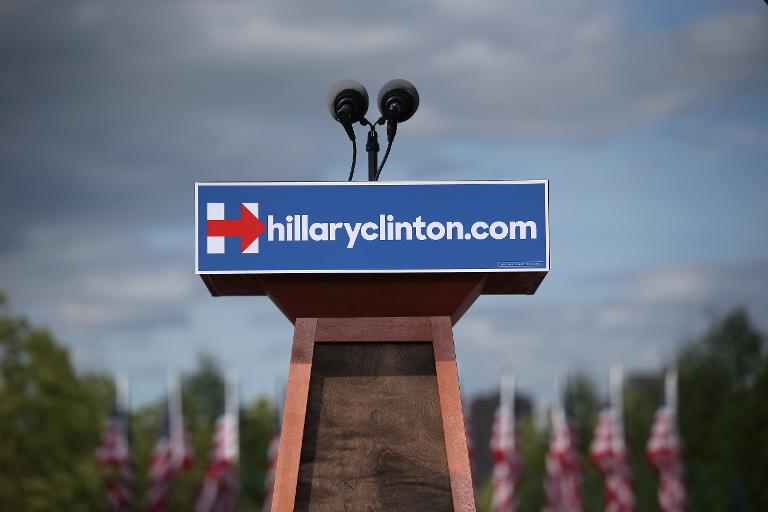 Ardent supporters streamed into a manicured New York park Saturday to watch Hillary Clinton lay out her bid to become America’s first woman president and her vision for the future.

Thousands poured onto Roosevelt Island, a tiny sliver of land in the East River between Manhattan and Queens, where black clouds threatening rain did little to dampen the enthusiasm of devoted fans.

Clinton, the 67-year-old former secretary of state, New York senator and first lady is expected to be joined by husband Bill and daughter Chelsea in the family’s first joint appearance of the campaign.

In her hotly anticipated speech, she is expected to draw heavily on her mother’s disadvantaged background to convince voters that she understands their problems and promises to fight for the middle classes.

Her team sees the rally, on home turf in a state where Clinton was senator for eight years, as a chance to turn the tables on flagging opinion polls and position her as the champion of America’s squeezed middle class.

“Everyone deserves a chance to live up to his or her God-given potential. That’s the dream we share. That’s the fight we must wage,” said the 67-year-old former secretary of state in a video released Friday.

“Everyday Americans and their families need a champion, a champion who will fight for them every single day and I want to be that champion.”

Dressed in shorts and T-shirts, clutching water bottles and sun hats, supporters poured onto Roosevelt Island to attend the rally, greeted by an army of well-dressed, polite volunteers shepherding them into queues.

Evoking the atmosphere of a vacation park, school buses and gold buggies acted as shuttles, whisking the elderly or the disabled into the venue. Young families brought their children.

“I think it’s a historic time and I think she’ll make a great president,” said Malcolm, a retired sales employee who lives on Roosevelt Island, hurrying inside with his wife.

Dylan Hayes, 19, and friend Cristina Greenfield, 18, will vote in 2016 for the first time, part of the younger generation but who dismissed concerns that she is grandmother with an out-of-touch millionaire lifestyle.

– Draws on mother’s troubled past –

“I’m a big fan of her, what she stands for. She has a big leg up on the other candidates,” said Greenfield.

Upbeat pop tracks from the likes of Taylor Swift, Katy Perry and Jon Bon Jovi thumped out of loud speakers behind the stage, bedecked in US flags and overlooking Manhattan’s stunning skyscrapers.

Her political foes paint her as out of touch and not trustworthy. They have pilloried her charitable work with the Clinton Foundation, paid speeches, private email accounts and her record as secretary of state.

A CNN poll found last week a growing number of Americans say she is not honest and trustworthy (57 percent, up from 49 percent in March).

Saturday’s speech will break from the past in being deeply personal in an effort to prove that she is motivated by a calling higher than ambition.

Her beloved mother, Dorothy Rodham, was abandoned as a child by her parents, sent to live with abusive grandparents and left home to work as a nanny and housekeeper at age 14 during the Great Depression.

Clinton’s speech will take on women’s rights and paint the Republican Party as out of touch with an increasingly diverse electorate.

Friends and staff have long described Clinton as warm and fun, and are working to soften her sometimes frosty public image, which helped cost her the Democratic nomination to Barack Obama for the 2008 election.

The rally will open a new stage in the campaign, ushering in policy speeches and larger events after eight weeks spent holding small meetings in key states since announcing her candidacy.

Not only is Roosevelt’s wife Eleanor a personal hero of Clinton’s but in speaking at the memorial, analysts say Clinton is choosing to put herself at the heart of his enormous legacy and economic regeneration.

She will deliver her speech at Four Freedoms Park, a memorial to Roosevelt that celebrates the freedoms he outlined in 1941: freedom of speech and of worship, freedom from want and from fear.

In April, Clinton defined “four big fights:” building the economy, strengthening families and communities, getting unaccountable money out of politics and protecting the country from threats.