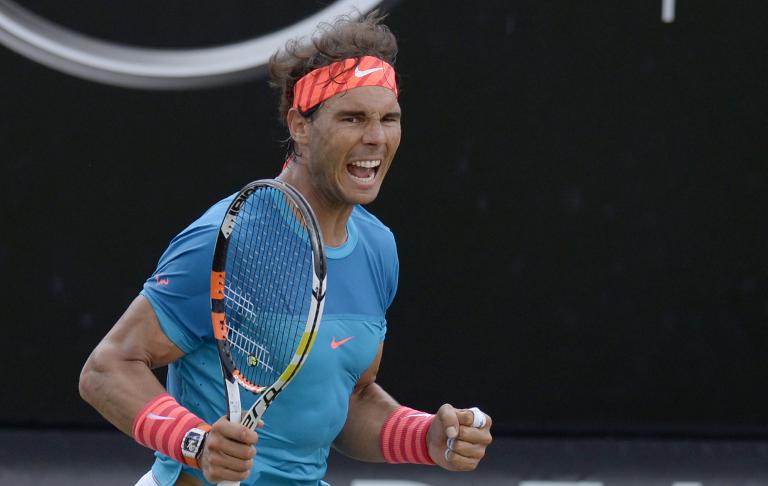 Rafael Nadal moved into position to become a dual-surface champion at the Stuttgart Open on Saturday with a 6-3, 6-4 semi-final defeat of Gael Monfils.

Victory in under 90 minutes on the newly-laid grass courts of the pre-Wimbledon event paved a path for Nadal to lift his third title in Stuttgart after winning in 2005 and 2007 when the tournament was still played on clay.

The left-hander will be bidding for the 66th trophy of his career but only the second this season.

Nadal came through over Monfils on the first of two match points as the French fourth seed sailed a forehand over the baseline.

Unable to find an ace in the contest, Nadal however made no double-faults and saved all four of the break points he faced as he beat Monfils for the 11th time in 13 meetings.

The win was effortless in contrast to the struggles Nadal went through in his first two matches this week, spending a combined five hours on court to win six sets.

“I’m very happy with this performance,” said the 29-year-old Spaniard.

“I’m slowly improving on grass. It would be fantastic to win here, but I can only focus on the final and try to play my best.”

He added: “I was feeling better with my tennis after the first two matches this week, it is always tough to start on this surface.

“Today I played aggressive and did what I had to do to keep my level high. I’ve not been in a grass final since 2011 (Wimbledon, losing to Novak Djokoic). This is important news for me.

“I’m enjoying being in this final and I’ll hope to be ready tomorrow.”

Serbian Troicki was overwhelmed to have done so well this week.

“It’s my first grass court final and I’m really excited to have gotten here,” he said.

“It was a great match for me, I served very well and used my slice. The match was very even most of the time but I was able to use a couple of chances to make the difference.”

The world number 28 stands 0-4 against Nadal, with all of their matches played on hard court.