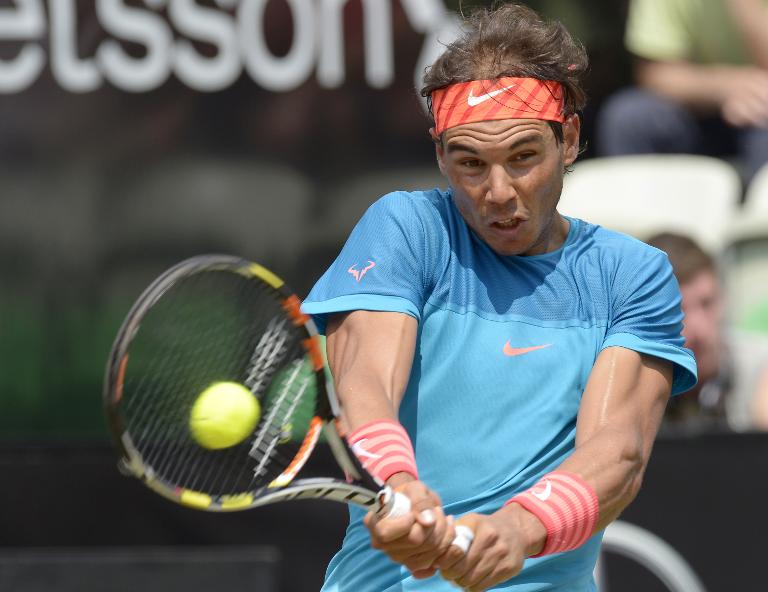 Top seed Rafael Nadal and Gael Monfils both struggled on their least-favourite surface Friday before setting up a semi-final at the first edition of the Stuttgart Open to be played on grass.

The former July clay-court tournament is now part of the three-week run-up to Wimbledon after being approached three years ago to consider making the change of surface and date.

Nadal needed almost two and a half hours to defeat fifth seed Bernard Tomic 6-4, 6-7 (6/8), 6-3, beating the Australian for the third time as they played on grass for the first time.

The Spaniard has taken six sets and almost five hours on court to win two matches as he struggles to make the switch of surfaces.

He could have been home a winner in straight sets after going up a break in the second set and again holding a 4-2 lead in the tiebreaker eventually won by Tomic, who saved a Nadal match point with an ace.

Nadal moved through to victory but only after saving two break points in the seventh game of the third set and coming through on his second match point a game later.

Despite his hard slog, Nadal is confident with his game ahead of Wimbledon and after a poor clay season where he was dethroned as French Open champion.

“I’m feeling strong and I’m motivated, I hope to have a good second half of the season. I played well today. It was a good match for me,” said Nadal.

“I had a great first set and in the second he played well. My game was at a good level, I’m happy with how I handled things. It was a very positive win, a good one for me.”

“Gael is a tough opponent,” said Nadal. “If you don’t play your best you are not going to win.

“I guarantee I’ll be fighting to be in the final.”

Monfils struck for his 10th win over Kohlschreiber against just two losses — the German won their grass-court semi-final in Halle in 2011 and also put out Monfils on the Stuttgart clay in 2013.

The Frenchman got off to an early break of serve in the third set to ensure victory after just under two hours on court in temperatures of 30 Celsius.

“I had some good luck today, I tried to play aggressive on returns and stick to a simple game plan,” said Monfils, who admits that he will never put grass at the top of his favourite surface list.

“I know the grass now but I came here knowing that I had to work. Playing on this surface is never easy for me.

“My main goal is to keep from getting injured and try to do my best. If I can win some matches, that’s even better.

“I’d like to win more matches on grass, but even that won’t help me to like it, actually.”

Monfils was also concerned about a possible groin injury, for which he was receiving post-match treatment.