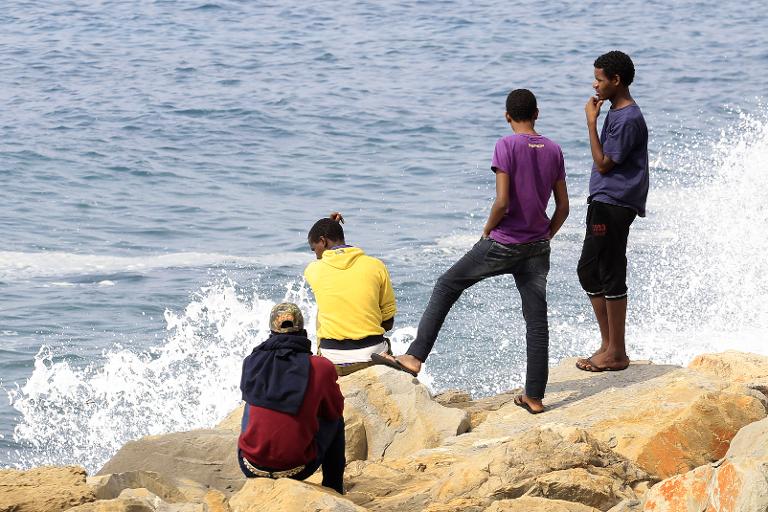 Dozens of migrants refused entry into France went on hunger strike Saturday at the border crossing in Ventimiglia in Italy, where they organised a sit-in and threatened to block traffic.

French border police told AFP they had been ordered not to let through the migrants, many of whom came from Somalia, Eritrea, the Ivory Coast and Sudan, and hoped to travel onwards to Germany, Britain or Sweden to request asylum.

“We are not going back, we need to pass,” read a large banner held aloft by one group of protesters, while another read: “We need freedom.”

Curled up on pieces of cardboard, sheltering where possible under trees and bushes, men, women and children who had made the journey from Libya by boat to Italy said they would block traffic if they were not allowed to pass.

While the women and children ate food provided by the Red Cross, the men refused.

“We won’t eat,” said 20 year-old Mustapha Ali. “We spent all of yesterday in the heat, and last night in the rain and cold. If we must die here, no need to eat.”

A record number of 1,439 migrants were intercepted this week by French police in the Alpes-Maritimes area of southeast France, with 1,097 returned to Italy.

Mohamed from Sudan told AFP he had arrived in Sicily with his brother and travelled by car and train as far as Menton in France — just across the border — where he had been arrested at the train station and escorted back to Italy.

“In Darfur there is a lot of war and violence, they massacre people, we want peace,” he said.

The Schengen open borders accord means migrants landing in Italy can usually easily travel through neighbouring France, Austria, Switzerland and Slovenia as they seek to make it to Britain, Germany and Scandinavia.

But border controls have been temporarily reintroduced due to a recent summit of G7 leaders in Germany.

The mayor of Ventimiglia, Enrico Ioculano, told Sky TG 24 television that some of the migrants appeared to be getting through to France anyway by train.

“There are currently around 50 migrants at Ventimiglia’s train station, the same number as there were a few days ago, though the faces have changed,” he said.

“At least 200 have come and gone, I would guess they got into France by train,” he said.

The suspension of Schengen has increasing the pressure on Italy, where reception centres are at breaking point with about 76,000 people accommodated nationwide.

The build-up has seen hundreds of migrants including three-month-old infants bedding down in Milan Central and Rome’s Tiburtina train stations.