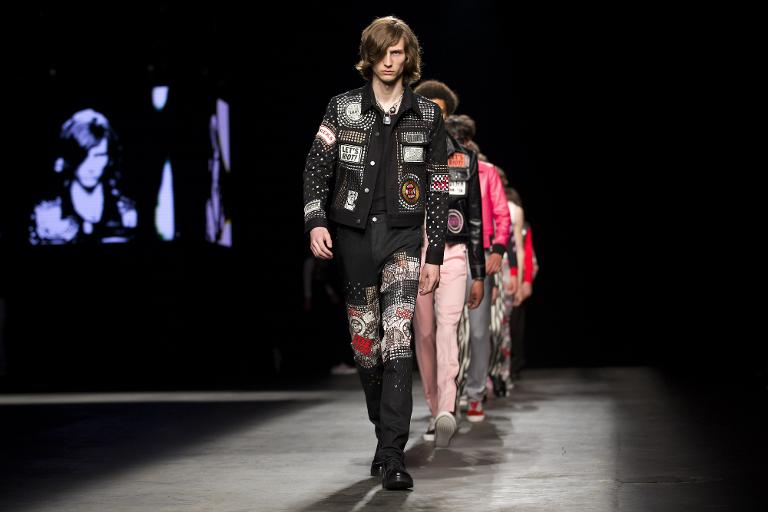 Sharp suits vied with streetwear and top brands at men’s fashion week in London, which opened Friday with an eye on boosting ties with the lucrative luxury Chinese market.

Burberry, Alexander McQueen, Tom Ford and Jimmy Choo are some of the big names showing over the next four days alongside Savile Row tailors such as Richard James, Gieves & Hawkes and Hardy Amies.

The event opened with a show by Topman, the brother label of high-street brand Topshop, featuring retro tracksuits, wide-legged chinos and sporty tailoring and watched from the front row by Formula One world champion Lewis Hamilton.

Men’s fashion week, officially known as “London Collections: Men”, grew out of the larger womenswear event and is now in its seventh edition, with 77 designers on the main programme.

This season sees a new focus on promoting British menswear to China, with the appointment of the event’s first international ambassador, 45-year-old Chinese model, actor, singer and philanthropist Hu Bing.

“We’ve been looking at the Asian market for quite some time because there’s been huge interest in London Collections from Asia,” said Dylan Jones, chairman of men’s fashion week and editor of Britain’s GQ magazine.

Attendance by Chinese press and buyers has grown 185 percent since the event began in 2012, he told AFP, adding that Hu would “take the message of British menswear all around the world, but particularly to China.”

China was the fifth largest market for luxury ready-to-wear menswear in 2014 and is expected to become the second largest after the United States by 2017, according to analysts Euromonitor International.

Hu said he wanted to be “the bridge” between London and Asia — a role which includes encouraging young Chinese designers who want to show in the British capital.

Only one Chinese designer, Beijing-based Xander Zhou, has been a regular fixure on the London menswear calendar.

In the past he has deliberately eschewed what he calls the traditional “dragons and peonies” for fear that he would be pigeon-holed — but said this is about to change.

In his spring/summer 2016 collection, to be shown on Monday, “I have found the courage to actually use oriental elements after using elements from many other cultures in my past collections,” Zhou told AFP.

“The fact that I am ready now has to do with the way I have evolved, but also with the way the world has evolved in terms of stereotypes about ‘Chinese designers’.”

Zhou welcomed the new focus on China, which will also see Beijing-based Sean Suen make his debut with a show sponsored by GQ China magazine on Monday.

“China is ‘happening’ in many ways… and when it comes to menswear, London is where the new and edgy attract the world’s attention and get people talking,” Zhou said.