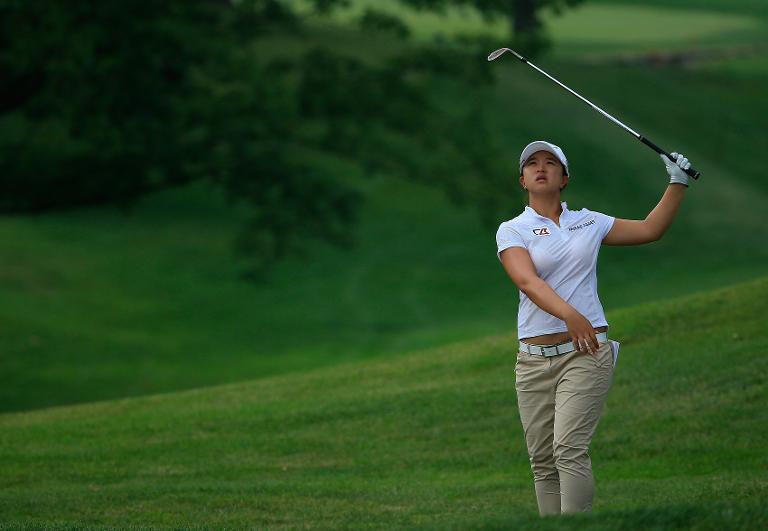 South Korean Kim Sei-Young eagled the par-five 15th hole en route to a five-under-par 68 and the halfway lead in the Women’s PGA Championship, as world number one Lydia Ko missed the cut.

Not only is Park trying to win a third straight title in the second women’s major of the year — formerly known as the LPGA Championship — she’s closing in on the world number one ranking of New Zealand teen Ko.

Ko struggled to a three-over 76 for a two-over total of 148 and missed the cut for the first time in her pro career — ending her streak of 53 straight LPGA cuts made.

Ko, 18, played her second nine in four-over 40. She teed off on 10 and was one-under for the day after two birdies and a bogey in her first nine holes.

But a double-bogey six at the second hole was followed by bogeys at the third, fourth and sixth, and even a birdie at her penultimate hole left her one shot outside the cut line.

“It was already kind of too late,” said Ko, whose remarkable resume will remain without a major title for a little longer at least. “I made a double and just couldn’t get anything turned around.”

Kim, meanwhile, is eying a first major to add to two titles won this year, in the Bahamas and at the Lotte Championship.

She added another birdie at the par-five fifth, and moved within a shot of Webb atop the leaderboard with a birdie at 11.

Kim, who held a three-shot lead after 54 holes before fading to tie for fourth at the year’s first major, the ANA Inspiration, took the outright lead with her eagle at 15, finishing off the round with three pars.

Park also played without a bogey, nabbing three birdies in her first six holes before back to back birdies at six and seven before she ended her round with pars at eight and nine.

“Yesterday I played kind of conservative,” Park said. “It’s a major championship and there’s not going to be many birdies.

“I ended up making a few mistakes yesterday, and looking at the scoring yesterday and this morning, the scoring was still good. So I thought I should play a little more aggressive and play for more birdies and seemed like it worked.”

Webb started off with seven straight pars and then drained a birdie on eight. Another birdie on 12 pushed the veteran to seven-under, and after she followed a bogey at 16 with a birdie on 18 she was in the lead as she walked off the course.

Webb and Park were one stroke in front of Canadian 17-year-old Brooke Henderson, who posted a 73, and Norway’s Suzann Pettersen, who carded a 66.

Overnight leader Shin carded a 75 and was joined on 141 by world number three Stacy Lewis, who signed for a 71.