In time for summer: 'connected' bikini tells you how to tan | Newsmobile
Tuesday, August 9, 2022

Home World In time for summer: 'connected' bikini tells you how to tan 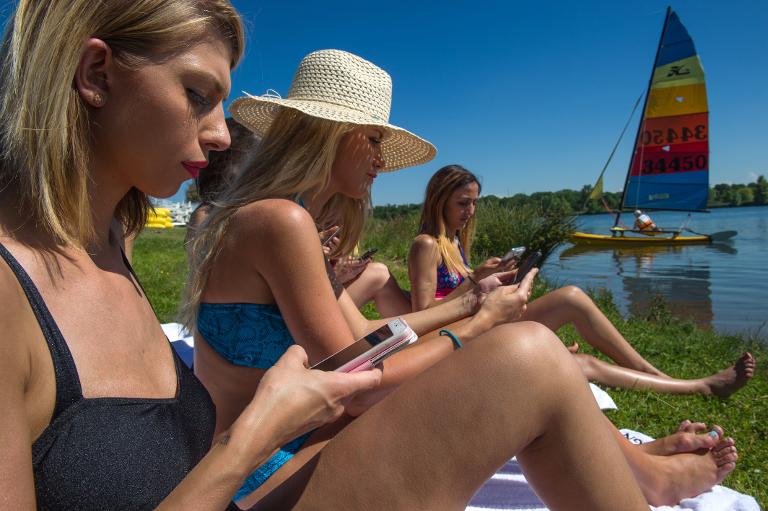 The Internet of Things — connecting everyday items with sensors — is hitting the beach in time for the northern hemisphere’s summer with a bikini that says when it’s time to apply more sun screen.

The made-to-measure invention comes from France — the country that invented the bikini — but with a price tag that might make even the well-tanned beach amazon blanch: 149 euros ($167).

For that price, though, the wearer will get a two-piece swimsuit with a small detachable ultraviolet sensor that, through a smartphone or tablet, sends a “sun screen alert” when the user’s skin needs more protective sunblock cream.

The detector is calibrated to the wearer’s skin type and how much of a tan she wants to get.

And there’s even a “Valentine” function that sends the message to a boyfriend’s smartphone so he knows when to apply the cream to his girlfriend’s skin.

“The idea came to me right away, on a day when I saw someone get sunburnt on a beach,” the Frenchwoman behind the smart bikinis, Marie Spinali, told AFP.

She started her company, Spinali Design, last month in the eastern French town of Mulhouse where she lives, and sells the bikinis through her website.

“There are flowerpots that give an alert when plants need watering, so I thought it was time to invent something to warn when the sun is too strong,” she said.

“It’s not a gimmick,” she added, explaining that often when people think to add more suncream, it’s too late and they already have sunburn.

An expert, Doctor Claudine Blanchet-Bardon of France’s National Association of Dermatologists, said the device was “interesting, because anything that warns people against UV exposure is good”.

But she qualified that by saying that having the sensor attached to a bikini “doesn’t send the right message — the best protection against the sun is to not get too much exposure and to stay covered with clothes”.

A journalist for a French website specialised in the Internet of Things, Thomas Remilleret of ObjetConnecte.net, commented that the idea of having UV detectors linked to a smartphone app is “not really new or revolutionary”.

But, he acknowledged, Spinali’s bikinis “meet a demand” even though he believed their price still too high for the market.

Spinali said her team was working with French researchers in nanotechnology to come up with a smaller UV sensor that would be part of the bikini itself.

She also said they were at work on models for men and for children — with the sensors for the latter also featuring GPS locators, to quickly find kids on the beach.