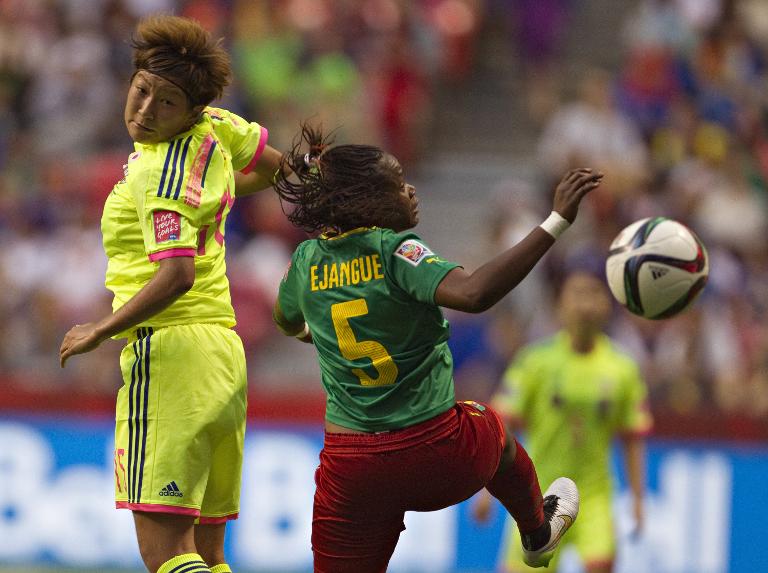 Defending champions Japan became the first team to advance to the last 16 of the Women’s World Cup on Friday as the United States’ progress was stalled by a goalless draw with Sweden.

Aya Sameshima and Yuika Sugasawa sealed Japan’s 2-1 win over Group C rivals Cameroon in Vancouver, seeing the Nadeshiko through to the knockout stage with a game to spare.

Japan have six points from two games, having also beaten Switzerland 1-0, with the Swiss on three after whipping Ecuador 10-1 on Friday.

Cameroon, who beat Ecuador 6-0 on Monday, are also on three points while the winless South Americans are the first team to be eliminated from the World Cup.

The United States, among the tournament favourites, were held to a 0-0 draw by a Swedish side led by the Americans’ former coach Pia Sundhage, as Group D goes down to the wire following Australia’s 2-0 win over Nigeria, courtesy of a Kyah Simon brace.

The United States lead the group with four points, followed by Australia on three, Sweden on two and Nigeria bottom with one point.

The Japanese quickly took control of the game at BC Place Stadium with defender Sameshima opening the scoring after just six minutes and forward Sugasawa getting the second goal eleven minutes later.

Cameroon fought back desperately late in the second half, but Ajara Nchout’s goal on 90 minutes was not enough as Gaelle Enganamouit’s header and a shot by Augustine Ejangue both sailed wide in the dying minutes.

“The Cameroonians threw everything at us in the closing stages,” said Japan coach Norio Sasaki.

“I expected the game to be pretty intense and it was, there were so many close moments. It was great fun,” said Sasaki.

The final round of group games takes place on Tuesday with Japan playing Ecuador in Winnipeg and Cameroon taking on Switzerland in Edmonton.

The Americans, who started with captain Abby Wambach on the bench, were given a tough test by the Swedes, who had played to a 3-3 draw with Nigeria in their opening match.

Wambach, 35, came on after 67 minutes, boosting the side as they played in front of thousands of American fans who had travelled the short distance over the Canadian border to support the 1991 and 1999 champions.

But a late headed chance for Wambach was denied by the reliable Swedish goalkeeper Hedvig Lindahl.

“We’re still in the driver’s seat and still have the chance to finish top, our focus now will be on Nigeria,” said USA coach Jillian Ellis.

USA play Nigeria on Tuesday with Australia up against Sweden in their final group games.

In Vancouver, it was a first World Cup win for debutants Switzerland and the 10-1 scoreline equalled the most goals ever scored in a Women’s World Cup game.

Ecuador’s Angie Ponce scored an unprecedented two own goals in addition to becoming the first woman to get a World Cup goal for Ecuador with her 64th-minute penalty.

Fabienne Humm’s five-minute hat-trick early in the second half was the fastest ever in the women’s tournament, and Ramona Bachman also scored three for the Swiss.

The competition continues on Saturday with Group E leaders Brazil playing Spain as Costa Rica take on South Korea in Montreal, while Group F leaders France play Colombia and England are up against Mexico in Moncton.

The top two teams in each group advance to the last 16 along with the four best third-place finishers.