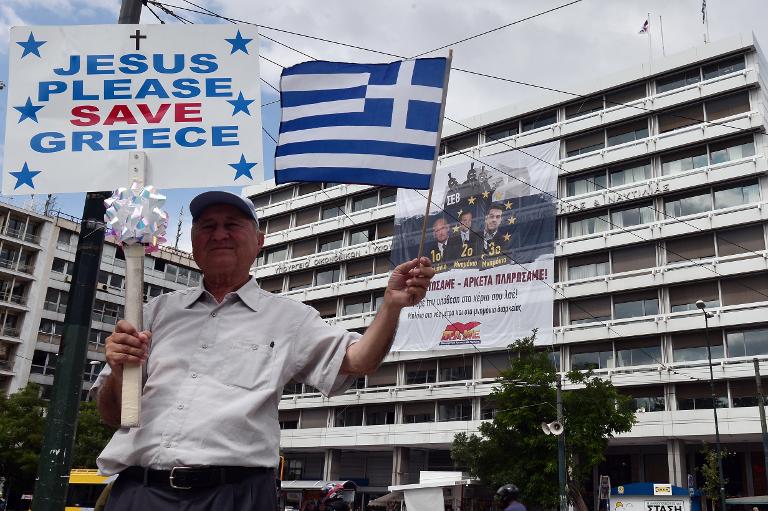 Eurozone officials have discussed the possibility of a dreaded Greek default if it fails to reach a debt deal, sources said Friday, piling further pressure on Athens to seal an agreement with its EU-IMF creditors and avoid crashing out of the euro.

The Athens stock market dropped 6 percent after it emerged that senior eurozone officials meeting in Bratislava on Thursday had war-gamed “worst case” scenarios of Greece not being able to pay its bills.

But Greece rejected the “pressure” from its creditors and said it was ready to make “counter-proposals” on a deal to unlock vital bailout funds and would send a senior delegation to Brussels on Saturday.

The furious back-and-forth took place a day after the International Monetary Fund’s negotiating team flew back to Washington from Brussels because of major differences.

“In discussions, a default was mentioned as one of the scenarios that can happen when everything goes wrong,” a eurozone official told AFP on condition of anonymity after the Bratislava talks.

Another official added: “It was a preparation for the worst case. Countries wanted to know what was going on.”

The five-month standoff over the refusal by Greece to agree on reforms demanded by its creditors is set to reach a climax at a meeting of finance ministers in Luxembourg on June 18.

“It’s clear that members states are increasingly raising questions on what are the possible ways forward in this situation,” said Valdis Dombrovskis, the European Commission vice-president for the euro.

“We have to evaluate all the possibilities,” Lithuania’s Finance Minister Rimantas Sadzius told AFP.

A deal to unlock the last 7.2 billion euros ($8.1 billion) of Greece’s international bailout is needed next week to give national parliaments time to approve it before the bailout expires on June 30.

Greece faces a huge 1.6 billion euro payment to the IMF at the end of the month and a further 3.4 billion euros to the European Central Bank on July 20.

German Chancellor Angela Merkel said all sides involved had to keep talking to reach an agreement, adding that “where there’s a will there’s a way”, despite Berlin’s hardline stance on Greece.

A narrow majority (51 percent) of Germans polled this week by ZDF television said they are opposed to Greece still sharing the single currency. Six months earlier, only 33 percent were against.

Eurogroup chief Jeroen Dijsselbloem, the Dutch finance minister who heads the group of 19 eurozone finance ministers, insisted it was “unimaginable” to do a deal without the IMF.

“If the IMF walks out â€“-which they wonâ€™t I’m sure, then part of the programme’s financing will be gone and then we no longer have a base,” he said, adding that the Fund’s involvement was indispensable.

Greek Defence Minister Panos Kammenos meanwhile insisted that a deal “will come about by June 18 or never”.

Athens meanwhile accused the IMF of trying to pressure other creditors.

A government source in Athens said the IMF “was pushing in all directions, and mainly in the direction of Berlin, to apply harsh policies in Greece so that it can get its money back.”

There have been reports of divisions between the hardline IMF and the EU, with the Washington-based lender said to be keen on Europe wiping out some of Greece’s debt.

The source claimed that technical talks in Brussels “have been completed” as far as Athens is concerned and the decision was now a political one.