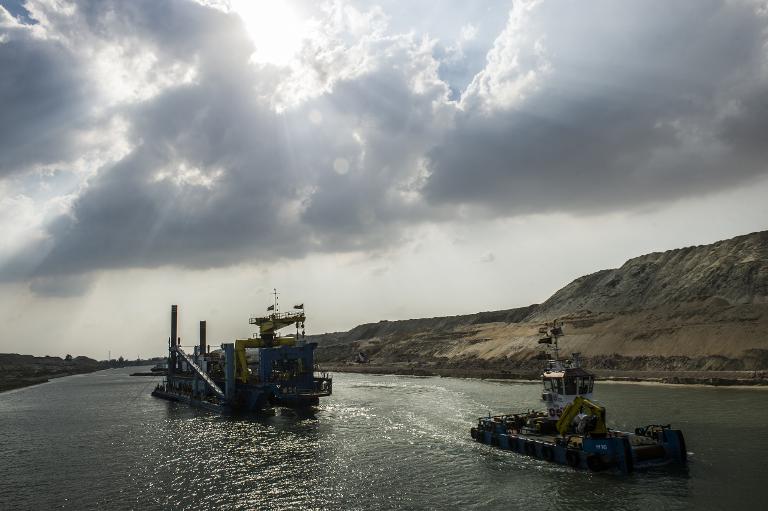 Egypt will inaugurate a “new Suez canal” shipping route in August aimed at speeding up traffic along the existing waterway and boosting revenues, officials said Saturday.

Dubbed the Suez Canal Axis, the new 72-kilometre (45 mile) project will run part of the way alongside the existing canal that connects the Red Sea to the Mediterranean.

It involves 37 kilometres of dry digging and 35 kilometres of expansion and deepening of the Suez Canal, in a bid to help speed up the movement of vessels.

“The digging and dredging operations will be completed on July 15,” Suez Canal Authority chief Mohab Mameesh told reporters in the canal city of Ismailiya.

A ceremony will be held on August 6 to inaugurate the project, he said.

“Once the president inaugurates it, vessels will start moving through the new waterway,” Mameesh said. He said 85 percent of the project that is being executed by the army has been completed so far.

President Abdel Fattah al-Sisi launched the project in August and set an ambitious target of digging the new canal in one year.

The project is part of an ambitious plan to develop the zone around the canal into an industrial and commercial hub, that would include the construction of ports and provide shipping services.

“The entire project is Egyptian… the idea, the planning, and the funding” and will “once again put Egypt on the world investment map,” said Mameesh.

Authorities raised $9 billion (7.9 billion euros) to build the new canal by selling shares in the project to domestic investors, with private Egyptian companies tasked with its construction.

The new canal is expected to more than double Suez revenues from $5.3 billion expected at the end of 2015 to $13.2 billion in 2023, according to official estimates.

Officials gave a quick tour of the new canal to journalists.

Several sand excavating machines, cranes and bulldozers were operating on both sides of the new waterway.

Heavy digging machines on board large vessels were operating in the waterway and small boats ferried workers from one side of the canal to the other as army helicopters hovered above.

“Since the work began, people here have not slept… One of the biggest dredging process in history is on here,” Mameesh said.

He said of the about 250 million cubic metres (8.8 billion cubic feet) of soil that had to be dredged, 219 million had already been dealt with.

“It’s not only about excavation and dredging. What we are doing is building a safe and secure path for global navigation. We will not allow any vessel to pass through the waterway unless it is secure.”

He said the main idea behind the expansion was to reduce the waiting period of vessels.

“If a vessel waits, it means it has to pay extra money to its crew, to Suez canal, and takes more time in delivering its goods.

“By building this new canal, we are serving the whole world and international trade… By bringing the waiting hours down to 11 from 22… this makes it one of the fastest waterways in the world.”

Built 146 years ago, the existing Suez Canal is one of the world’s most heavily used shipping lanes and has been a key source of international trade, earning Egypt billions of dollars in annual revenues.

The canal is a symbol of prestige and national pride for Egypt, apart from being vital for its economic stability.

In 1956, president Gamal Abdel Nasser nationalised the company, which was owned by British and French interests.