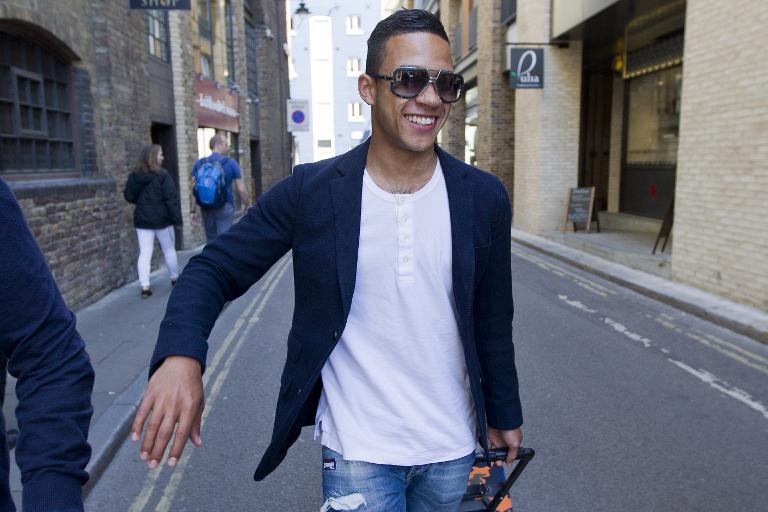 Manchester United winger Memphis Depay has set his sights on becoming an Old Trafford icon after completing his transfer from PSV Eindhoven on Friday.

Depay’s impending Â£31 million ($48 million) move was announced last month and the Netherlands international has finally been officially confirmed as a United player.

United confirmed the 21-year-old has signed a four-year contract, with the option to extend for a further year, and Depay heads to Manchester with the goal of following in the footsteps of the club’s all-time greats.

Asked how much he wanted to emulate the feats of legendary United wingers Ryan Giggs and Cristiano Ronaldo, Depay told MUTV: “I’m going to let my feet speak. I hope I can develop here in the Premier League and I hope I can be like those great legends one time in my career.

“I’m going to work hard, so let’s see. I believe I can be a great player for Manchester United.”

Depay’s confidence comes from the brilliant form that saw him finish as the top scorer in the Dutch top flight last season, with his 22 goals in 30 games helping PSV to the title.

His transition to life in a new country will also be aided by the presence of his former Netherlands boss Louis van Gaal, who is now in charge at Old Trafford.

“I know Memphis well from our time working together in the Netherlands national team. He is a young versatile player who has the ability to play in a number of different positions,” van Gaal said.

“It will take time for Memphis to get used to the rhythm of the Premier League but I have no doubt that he has the potential to become a great footballer for this club and he is at the right club to continue the good work he has done so far.”

Depay broke into the PSV side in 2011 and went on to make 124 senior appearances for the club, scoring 50 goals in total.

He has already endeared himself to United fans by snubbing an offer from their arch rivals Liverpool in favour of what he describes as a dream move to Old Trafford.

“This is a dream come true for me. To play for the biggest club in the world and also to have the chance to work with someone who I believe is the best manager in the world, Louis van Gaal,” he added.

“I have great belief in my ability and I work hard to strive to achieve my dreams.

“I have been at PSV Eindhoven since I was 12 years old and I would like to thank them for everything. It was a great moment when we won the league and I was so happy to be part of that.

“This is now a new chapter in my life and one that I am looking forward to.”