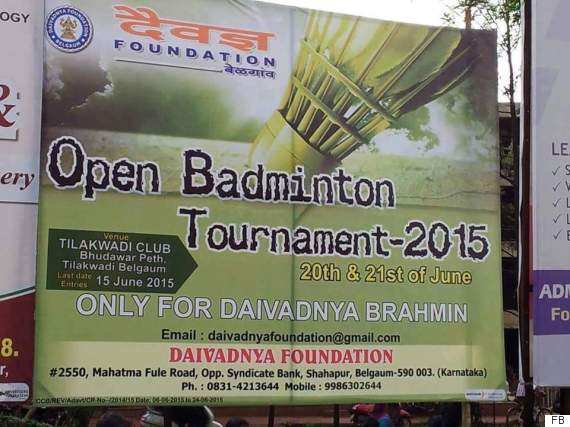 We think sport and we think of equality, of the best contender winning and all of that jazz.Â Which is why, when a Bangalore based Daivadnya Foundation organised the Open Badminton Tournament 2015, to be conducted from fromÂ June 20-21, many lashed out at it.

No, organising a badminton tournament wasnâ€™t the problem. Organising it for Brahmins only was.

Now, many people took to social networking sites to express their anger, calling such standards as elitist, going on to the extent of slamming the organisation for bringing back the caste system. Being an â€˜openâ€™ tournament, people cited this was unacceptable.

However, a member of the organisation says that the â€˜openâ€™ is not for castes, but for age groups.

Also, before we jump the guns, letâ€™s understand the other side of it. The organisation says, “Our aim isn’t to appear elitist or exclusive at all but to identify rising talent from our own community. We intend to help these young shuttlers make a name for themselves. There is no question of mistaking our intentions. If another community wants to conduct a tournament, it is free to do so.â€

Perhaps we were just making a mountain of a molehill.