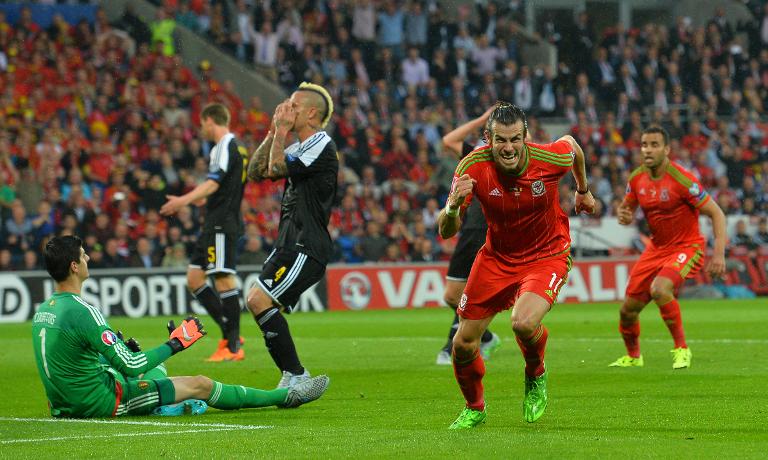 Wales took a huge step towards ending their long wait to return to a major tournament finals as Gareth Bale’s strike secured a 1-0 win over Belgium in Cardiff in Euro 2016 qualifying on Friday.

With his new Real Madrid coach Rafael Benitez watching from the stands at a rocking Cardiff City Stadium, Bale chested the ball down and swept home in the 25th minute following an error by Belgium midfielder Radja Nainggolan to put Wales in front.

Chris Coleman’s side then soaked up the pressure put on them by a supremely talented Belgium team who currently sit second only to Germany in the FIFA rankings.

The result means Wales remain unbeaten in qualifying Group B and they now top the section, three points clear of the second-placed Belgians.

More importantly, with only the top two in each group certain to qualify automatically for next year’s finals in France, they are five points clear of third-placed Israel, whose own hopes were dealt a blow in a 3-1 defeat to Bosnia and Herzegovina.

Wales, who have never been to a European Championship, appear poised to finally qualify for a major tournament for the first time since the 1958 World Cup, with four matches still to play in the autumn, the next being away to Cyprus in September.

“We prepared well and worked hard together and we showed that. We played some good football, battled in every area and I think we deserved the win in the end,” Bale told Sky Sports.

Bosnia boosted their own hopes of snatching at least third place, which brings with it a chance to reach the finals via a play-off at the very least, by coming from behind to beat Israel in Zenica.

Tal Ben Haim — not to be confused with the former Chelsea defender of the same name who was also in the Israel line-up — put the visitors ahead late in the first half.

However, Bosnia turned the game on its head thanks to an Edin Visca brace either side of a penalty by the Manchester City striker Edin Dzeko.

Meanwhile, Cyprus also remain in the hunt after coming from behind to win 3-1 away to minnows Andorra, Nestor Mytidis scoring a hat-trick after Dossa Junior’s own goal put the home team ahead in the Pyrenees.

In Group H, beaten Euro 2012 finalists Italy came from behind to draw 1-1 in Croatia in a game played behind closed doors in Split as a consequence of violent clashes and rocket-throwing incidents when the nations met in Milan last November.

Atletico Madrid’s Mario Mandzukic was the chief protagonist, having a penalty saved by Gianluigi Buffon before giving Croatia an 11th-minute lead.

But Mandzukic then conceded a penalty at the other end which Antonio Candreva chipped in, and the draw allowed both sides to remain unbeaten after six matches.

Croatia, who had captain Darijo Srna sent off late on, are top of the group, two points clear of Italy, with Norway a further two points back in third after a goalless draw at home to Azerbaijan.

In the group’s other game, Bulgaria claimed their first win, Ivelin Popov’s strike securing a 1-0 win in Malta.

Nowhere is the qualifying campaign more fascinating than in Group A, in which Iceland are well placed to advance to their first major finals and the Netherlands continue to lag in third place.

In Reykjavik, Iceland came from behind to beat the Czech Republic 2-1 and move above their opponents into first place in the section.

Borek Dockal gave the Czechs the lead, but captain Aron Gunnarsson of Cardiff City equalised and Kolbeinn Sigthorsson of Ajax then struck a 76th-minute winner.

After a dreadful start to their campaign, Guus Hiddink’s Dutch are now just three points behind the Czechs after second-half goals by PSV Eindhoven duo Georginio Wijnaldum and Luciano Narsingh clinched a 2-0 win in Latvia.

Turkey, who are fourth, beat Kazakhstan 1-0 thanks to a late goal from Atltico Madrid’s Arda Turan.

Qualifying continues on Saturday, when standout fixtures include the Republic of Ireland hosting Scotland and Germany facing Gibraltar in Group D.