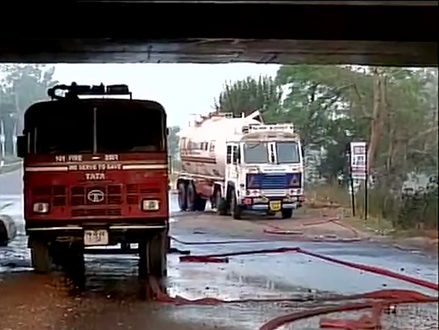 Ludhiana: In a tragic accident, at least 6 persons lost their lives and over 100 were injured after an ammonia gas tanker leaked in the outskirts ofÂ LudhianaÂ in the wee hours of Saturday.

The leak occurred when the Gujarat registered tanker got stuck under a flyover on the Doraha Bypass Road along a canal, about 25 kms from the commercial capital of Punjab.

The affected people have been admitted to different hospitals in Doraha, Khanna and Ludhiana

The gas leak created panic in the region with residents coming out of their houses when the gas from the leaking tanker spread in and around Doraha.

An NDRF team is in Doraha to provide aid to the residents of the area.

The gas leak has also affected animals with many having died due to exposure to the poisonous gas.

More details were still awaited and identities of the victims yet to be ascertained, police said, adding, senior civil and police officers have rushed to the spot to take stock of the situation.