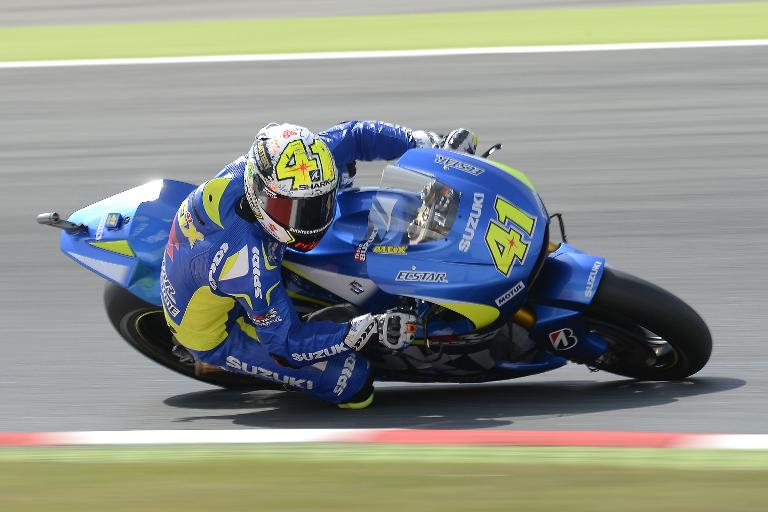 Aleix Espargaro clinched pole position at the Catalunya Grand Prix on Saturday, just ahead of team-mate Maverick Vinales as Suzuki took the front row spot for the first time in eight years.

It’s a Suzuki one-two for Sunday’s race, confirming the rise of the Japanese manufacturer this season.

Espargaro had retired in the two previous races, in France and Italy, but it was a different story at Montmelo.

It’s just the second ever pole position for the eldest of the Espargaro brothers after Assen last year, and the first time that Suzuki has won pole since 2007 when Chris Vermeulen was on top, also at Assen.

For a bonus, Espargaro also set a new lap record on the Montmelo circuit, going round in 1:40.546.

â€œUnbelievable. I pushed 100%. With the first tyre I pushed a lot but not to the limit, the second tyre I pushed, everything or nothing,” said the Spaniard.

“I almost crashed because I opened the throttle so early. First and second for Suzuki is great after the work they have done itâ€™s like a present for them. Hopefully we can be near the front tomorrow.â€

Vinales was 0.083 seconds behind his Suzuki teammate with Yamaha rider Jorge Lorenzo a tenth of a second off the pace.

“Unfortunately on my last try I made a mistake in turn three, I went too fast and a bit wide,” said former world champion Lorenzo who has won the last three races.

“In this corner, when you arrive wide you get a bounce and the bike becomes unstable. I had to put the bike up straight a little bit and lost three-tenths there.”

“I expect we will have to make some improvement for tomorrow, we have some work to do in the warm up and apply some small modifications,” said Rossi.

“For the race, as always it will be important to make a good start and stay within the top positions in the first laps. After that I will try to understand the pace for the second half of the race when the tyres start to slide a bit.”