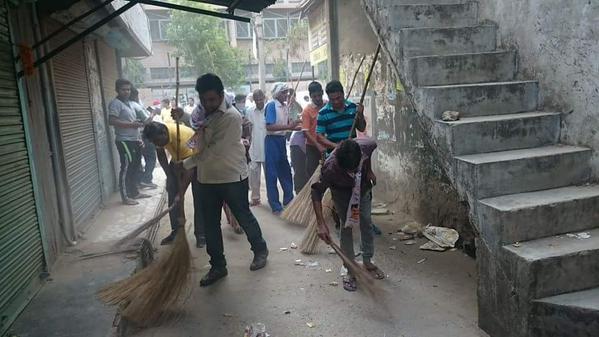 New Delhi:Â Â The Aam Aadmi Party on Saturday launched a cleanliness drive in the national capital a day after 11,000 municipal sanitation workers called off a 12-day strike, averting a looming health crisis as thousands of tonnes of garbage piled up in many parts of Delhi.

The AAP has also lined up rallies in all 272 wards in Delhi to create awareness about what it alleges as the “incompetence” of the BJP which governs the three municipal bodies in the city.

“We are here to support the sanitation workers… Delhi government doesn’t have the money but we have taken out funds to pay workers… If BJP can’t pay their salaries, we will not only pay salaries but also help them clean up,” said Deputy Chief Minister and senior AAP leader Manish Sisodia.

The sanitation workers agreed to return to work yesterday after Lieutenant Governor Najeeb Jung announced thatÂ Rs.Â 493 crore would be released to the capital’s civic bodiesÂ  to pay their salaries. They haven’t been paid in two months.

The Aam Aadmi Party has blamed the BJP for the garbage crisis in the city and has also accused Prime Minister Narendra Modi of “abandoning” the national capital.

“The Prime Minister has thousands of crores for Mongolia but it seems he doesn’t have money for MCD sanitation workers of Mongolpuri,” Dilip Pandey, AAP’s Delhi convenor, said on Friday.