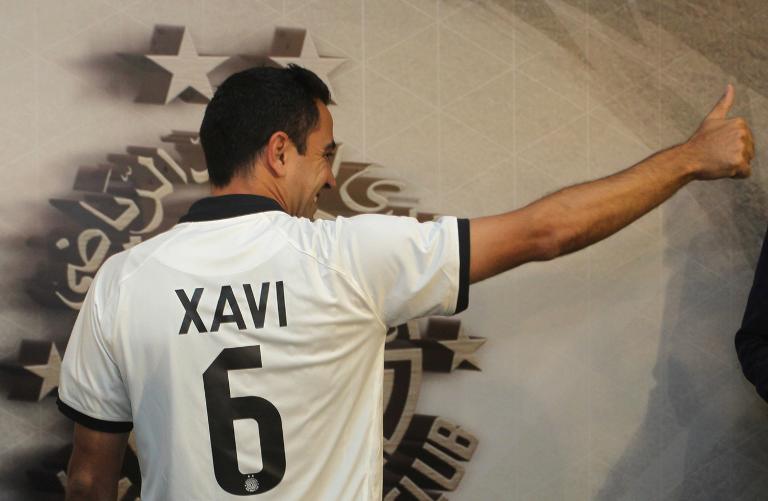 There are few feelgood football stories coming out of Qatar right now but Thursday’s unveiling of Xavi Hernandez as an Al Sadd player at least brought some light relief.

Mobbed when he arrived in Doha on Tuesday, the legendary midfielder was again greeted by hundreds of fans as he was officially unveiled by club officials.

A packed room applauded him into the press conference, young fans pressed against the glass windows to get a better look of their new hero and Xavi even managed to raise a laugh when he said the Arabic word for thank you, “shukran”, after being asked if he intended to learn the local language.

As in the majority of his career, Xavi did not put a foot wrong.

He thanked Al Sadd club, the Qatari people, praised the troubled 2022 World Cup bid and even found time to acknowledge Qatar’s successful Spanish handball coach Valero Rivera Lopez, who was among the crowd.

By the time he had finished speaking — and was mobbed again on the way out of the press room — Xavi number six shirts were already on sale downstairs in the club lobby for 180 Qatari Riyals ($50, 44 euros).

“I am here to see Xavi Hernandez, because I am a big fan of Xavi, of Barcelona, and I love him,” said Mohammad Sailfiti, a 22-year-old Jordanian fan, wearing the Catalan club’s shirt.

His friend, Khaled Marridi, also 22 and also wearing a Barcelona shirt, said Xavi would be a big success.

Those two fans were among the first to turn up for the early evening press conference, but a big crowd, some even wearing Real Madrid shirts, had assembled by the time Xavi’s appearance was due to start.

At a time when Qatar’s successful World Cup bid seems only to deal in allegations of corruption and human rights abuse, this was at least a reminder that whatever happens in seven years’ time — and wherever it happens — there will at least be some football played.

Among the fans there was Charlie White, a 24-year-old Doha-based environmental scientist from Bournemouth, England.

A Barcelona fan for 12 years, who lives in Al Sadd, she said the “thought of seeing Xavi up close and not just on the pitch is quite exciting”.

She started supporting the Catalans after watching a Barcelona training session, including Xavi, while on holiday when she was aged just 13.

And she was in little doubt it would work out well.

“I think it will be a very difficult challenge,” she said.

“I think the heat is obviously going to be quite a big factor. But I think he’s got determination and he’s coming over in a coaching aspect as well. I think it will be good for him to grow and carry on.”

In truth, Xavi would have had to have done something dramatic not to get a good reception.

Barcelona are extremely popular in Qatar, not only because of their recent successes but also because of the shirt sponsorship deals with Qatar Foundation and then Qatar Airways.

He is also not the first Spaniard to play in Qatar — Raul and Fernando Hierro played here briefly as well.

And it is clear some fans do not want the Barcelona connection to stop with Xavi.

“I dream about Lionel Messi to come here to Qatar but maybe after 10 years. I would like to see more players here,” added Sailfiti.