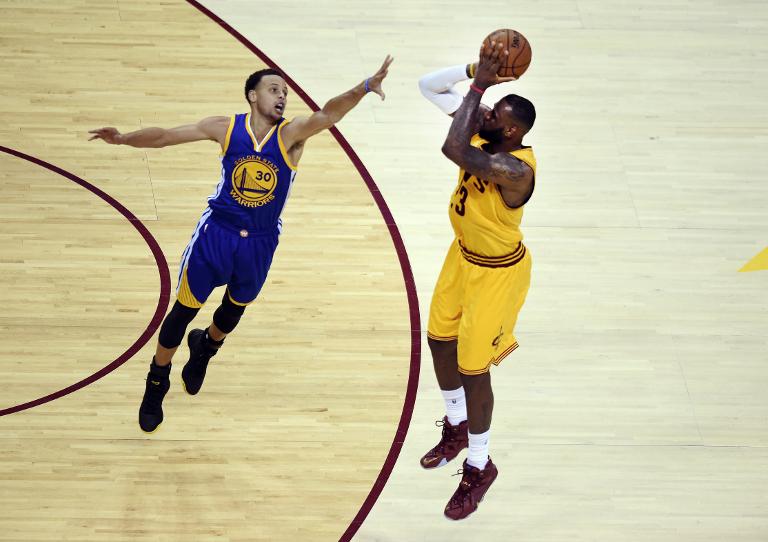 Andre Iguodala helped re-energize Golden State in his first start of the season and the Warriors ripped Cleveland 103-82 Thursday to level the NBA Finals at two wins each.

On a night when Cleveland superstar LeBron James needed stitches after cutting his head on a camera, the Warriors had 22 points each from Iguodala and NBA Most Valuable Player Steph Curry while forcing a fast tempo to frustrate the Cavaliers.

“The biggest difference was we played a lot harder,” Warriors coach Steve Kerr said. “We didn’t do much differently against LeBron. We were just more competitive and more active.

“We controlled the tempo and rhythm of the game. It’s not just about playing hard. It’s about playing every possession like it’s your last.”o team has ever recovered from a 3-1 deficit to win the NBA Finals, which made it vital the Warriors avoided their first three-game losing skid of the season, which they did by starting Iguodala and using a smaller line-up to end a run of slow starts.

“When we have that lineup out there, we were able to pick up the tempo and pace of the game,” Curry said. “We thought we would put some pressure on them and not let them be so comfortable with the lead like they had the past couple games.”

Hitting 36-of-77 from the floor with 12-of-30 from 3-point range, the Warriors kept Cleveland to 29-of-88 from the court and only 4-of-27 from beyond the arc as the best-of-seven series moves to Oakland for game five on Sunday.

Russian center Timofey Mozgov led Cleveland with 28 points, his NBA career high, and 10 rebounds while James, who had been averaging 41 points in the finals, had 20 points, 12 rebounds and eight assists.

James suffered two cuts to the right side of his head on a camera after falling into a photographer late in the second quarter, writhing in pain on the floor at the feet of fans while grabbing his head. He also battled leg cramps and fatigue in the second half.

“I was just trying to regain my composure. The camera cut me pretty bad,” James said of his spill. “Our medical staff did a great job stopping the bleeding.”

James said he had a lingering headache after the game but did not undergo the NBA’s concussion protocols. Instead, he went back into the game but struggled to be effective.

“He’s a human being and I’ve got to give him a minute here or there,” Cavaliers coach Dave Blatt said of James. “If I don’t, I’m really going to put him under more duress than he already is. When he’s out, everyone else has got to step up and give a bit more.”

Golden State opened a 63-50 edge in the third quarter before a 20-10 Cleveland run in which James scored 10 points and Mozgov added eight, cutting the Warriors lead to 73-70.

But a weary James went to the bench while Golden State went on a 20-7 run, Curry scoring eight points and Iguodala sinking two 3-pointers in the span as the Warriors seized a 93-77 edge with 5:35 to play, too much for the tired Cavaliers to overcome.

“I was hoping our team could buy me a few minutes. I was pretty much gassed,” James said. “We weren’t able to do that in the fourth quarter. It’s difficult. You want to be out there but you want to be effective while you are out there. They made a huge run and we just couldn’t regather.”

That’s just what the deep-benched Warriors had in mind by pushing the pace.

“They made that comeback and they just ran out of gas,” said Golden State’s Draymond Green. “Pushing the tempo, that was able to wear them down.”

Added Curry: “If you try to make him uncomfortable the whole game, you might wear him down. I think it worked.”