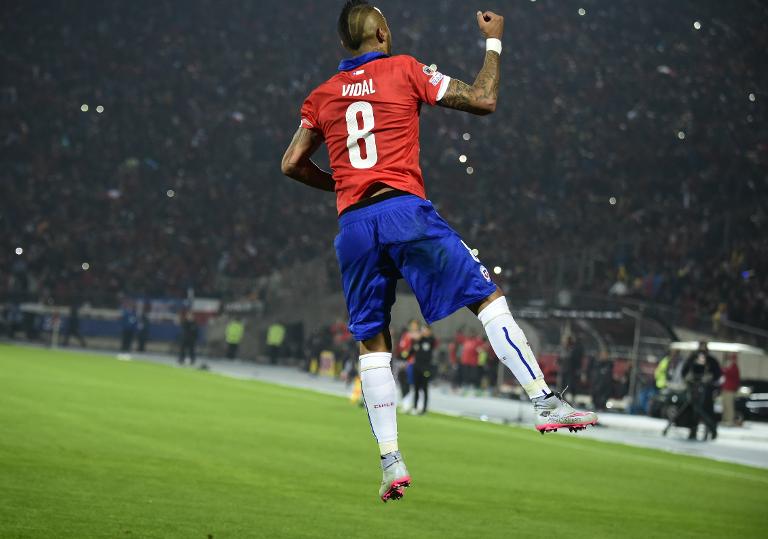 Arturo Vidal buried his Champions League heartache to set up a 2-0 opening victory for Chile over Ecuador as the Copa America kicked off.

Juventus star Vidal bounced back from the disappointment of defeat to Barcelona in last week’s Champions League final to score a 67th-minute penalty in a man-of-the-match performance.

Napoli’s Eduardo Vargas made it 2-0 late on to give the Chileans a winning start in Group A as they chase a first Copa America crown in 99 years of trying.

“It was very difficult, they pushed us to the end,” Vidal said after.

“We are very happy but we know we have to improve on this. The result is what counts though,” he added.

Vidal admitted he was still weary after turning out for Chile just days after last weekend’s Champions League final in Berlin.

“My back hurts a bit and I will need a massage after the match,” he said.

The win puts Chile firmly on course to qualify for the quarter-finals. Group A also contains Mexico and Bolivia, who meet on Friday in the second game of the tournament.

Chile had been unable to find a breakthrough until Vidal burst forward midway through the second half to be tugged over by Ecuador’s Miller Bolanos.

The hosts made sure of victory six minutes from time when Arsenal star Alexis Sanchez released Vargas who finished coolly for 2-0.

The only blackspot for Chile was a red a card for Matias Fernandez in the closing minutes for two cautions.

Argentina, led by Lionel Messi, and Brazil, now skippered by Neymar, have results on their side heading into the tournament.

Brazil completed their preparations on Wednesday in Porto Alegre, beating Honduras 1-0 to rack up their 10th consecutive friendly victory since last year’s World Cup, when they were humiliated 7-1 by Germany in the semi-finals.

The Barcelona team-mates are carrying a mountain of expectation on their shoulders.

Messi is determined to finally taste glory at a major international tournament while Neymar is aiming to erase the memory of Brazil’s World Cup debacle.

“I feel I’m in better shape arriving at this tournament than I was at the World Cup last year,” Messi said.

Messi and Argentina fell agonisingly short at the World Cup, suffering a 1-0 extra-time defeat to Germany in the final to extend a title drought which stretches back to the 1993 Copa America.

Argentina open their campaign against Paraguay on Saturday, and should progress from Group B which also includes Uruguay and Jamaica, one of two teams from the CONCACAF region invited to bolster the tournament.

Brazil will kick off Group C against Peru on Sunday, with Colombia and Venezuela completing the group.

Brazil defender David Luiz said his team-mates had emerged stronger from their World Cup nightmare against the Germans.

“The players who went through the World Cup are more mature,” the Paris Saint-Germain star said. “We are working hard every day to grow, to evolve.”

However Luiz said Brazil could expect a fierce challenge from their rivals as they attempt to reclaim a crown last won in 2007.

“It will be one of the most difficult Copa Americas in history,” Luiz said, citing the threat from Chile, Argentina and holders Uruguay.