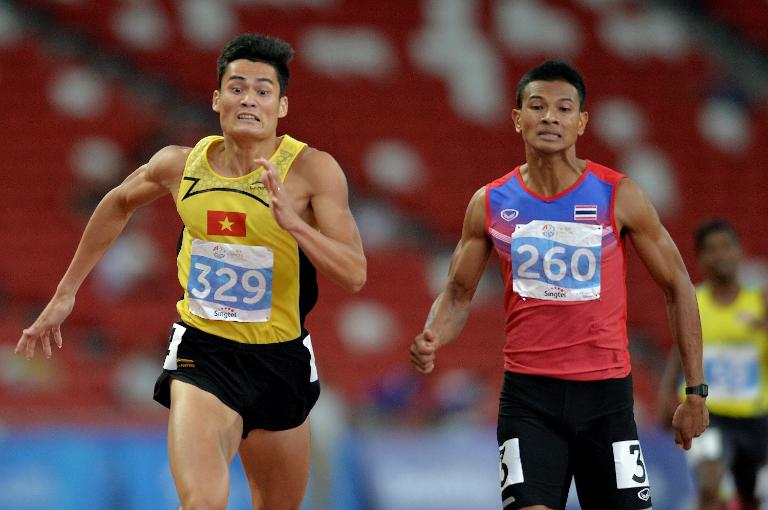 Thailand seized seven athletics golds on Friday as they caught hosts Singapore at the top of the medals table and stamped their authority on the Southeast Asian (SEA) Games.

The last night of track and field turned into a Thai parade, with their sprinters providing the perfect final act with a men’s and women’s 4x100m relay double.

Thailand edged past Singapore, who have led since day one, on the medals tally with 71 golds to 70 late on Friday, with four days of competition still to go.

Sunisa Khotseemueang played a starring role by winning all seven events of the heptathlon as Thailand took seven out of Friday’s 10 athletics titles to reach 17 overall.

Earlier Kunanon Sukkaew outsprinted Vietnam’s Quach Cong Lich on the back straight to win a thrilling men’s 400m in a Games record 46.00sec.

“I didn’t expect it. I expected it to be in the one, two or three position but not the gold medal. I got the gold medal and I am very proud,” Kunanon said in Thai after the race.

Subenrat Insaeng hurled a new SEA Games mark of 59.56 in the women’s discus and Thailand also won the women’s high jump and the men’s long jump.

Elsewhere 11-year-old Malaysian Aaliyah Yoong won the women’s tricks wakeboarding — and she did it in some style.

Yoong’s score of 4,850 points meant she won by a distance from Indonesia’s Nur Alimah Prambodo, 16, who amassed 2,930 at Bedok Reservoir to take the silver medal.

Yoong became the youngest ever SEA Games champion in 2011 when she was just eight, and she told the New Straits Times: “My dad says I am already a veteran”.

“To complete two passes standing up was really tough because the waves were big and there was also quite a lot of backwash,” Yoong was quoted as saying.

Former world champion Ratchanok Intanon led Thailand to gold in the women’s team badminton with an emphatic 3-0 victory over Malaysia.

Ratchanok’s first-up 21-13, 21-14 win over Lim Yin Fun in 36 minutes set the tone as the Thais wrapped it up quickly, spending less than two hours on court.

Singapore interrupted a Thai golf sweep when they won the men’s team title, but overall it was a flat day for the hosts who added four golds to their overnight tally of 66.