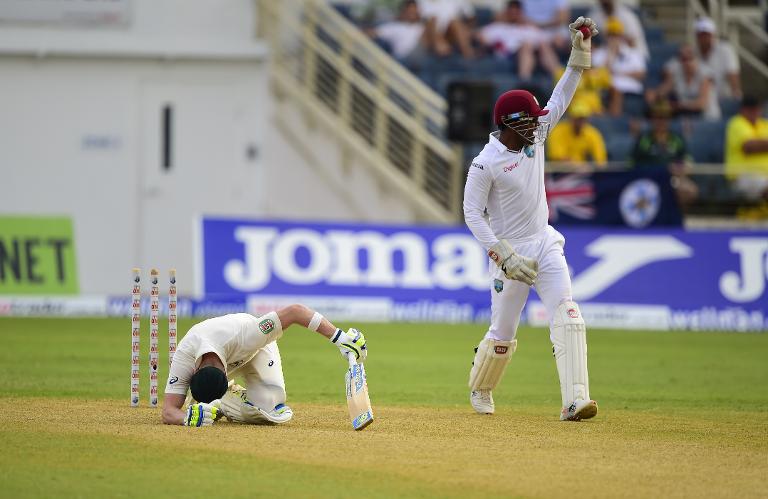 Steve Smithâ€™s ninth Test century in 28 matches anchored Australiaâ€™s 258 for four at stumps on the opening day of the second and final Test against the West Indies at Sabina Park.

Needing victory to square the series after a comprehensive nine-wicket loss inside three days in the first Test in Dominica, the Caribbean side did not help their cause after early strikes by Jerome Taylor with the new ball.

They wasted at least two clear-cut opportunities to limit the touristsâ€™ progress and give their depleted side a better chance of upsetting Test cricketâ€™s second-ranked team.

Smith, who will resume on the second morning on 135 after 357 minutes at the crease during which he struck 16 fours and two sixes off 278 deliveries, was missed by Darren Bravo at first slip off the part-time bowling of Kraigg Brathwaite an hour into the dayâ€™s final session.

Australiaâ€™s vice-captain was also reprieved via the television technology at the same score, 109, as replays resulted in the reversal of an lbw verdict awarded by umpire Richard Kettleborough to a vehement appeal by Taylor, the outstanding West Indies fast bowler.

“It was quite difficult initially but it got easier as the day went on,â€ said Smith.

â€œIâ€™m working really hard in the nets. That and patience out in the middle seem to be working well for me.â€

Taylor, who finished with three for 18 off 15 overs, was a model of accuracy and efficiency from the start of the day, removing David Warner for a duck in the first over, caught by Shai Hope at third slip, and fellow opener Shaun Marsh leg-before for 11 shortly after to be 16 for two.

It should have been 22 for three when Michael Clarke, on three, popped up a catch back to Kemar Roach off his own bowling.

But the captain was granted a reprieve when the request by Kettleborough for a television replay confirmed that the fast bowler, not for the first time in his international career, had no-balled.

Australiaâ€™s captain made the West Indies pay, contributing a fluent 47 in a 118-run third-wicket partnership that was ended when Clarke edged an attempted off-drive at fast-medium bowler Jason Holder to wicketkeeper Denesh Ramdin.

â€œWe started well but it got tougher as the day went on,â€ said Holder about the day in the field for the home side.

â€œWe need to capitalise with some early wickets in the first hour tomorrow to get back in contention.â€

Clarke was the only wicket to fall in the afternoon session as Adam Voges, fresh from a debut unbeaten 130 at Windsor Park a week earlier, played assuredly for 37 in helping Smith put on 76.

With Roach and frontline spinner Veerasammy Permaul, both playing in place of unfit colleagues Shannon Gabriel and Devendra Bishoo, unable to stem the flow of runs, it was left to Taylor to engineer another breakthrough, Voges departing in the manner of his captain.

Shane Watson (20 not out) faced few challenges in putting on 48 for the fifth wicket with Smith by the close as the West Indies, in what seemed an unusual defensive posture, declined to take the second new ball when it became due during the final hour.

The home side suffered setbacks before the start of play with their most experienced batsman, Marlon Samuels, ruled out because of illness while leg-spinner Devendra Bishooâ€™s badly-bruised finger on his bowling hand did not heal sufficiently for him to be considered.