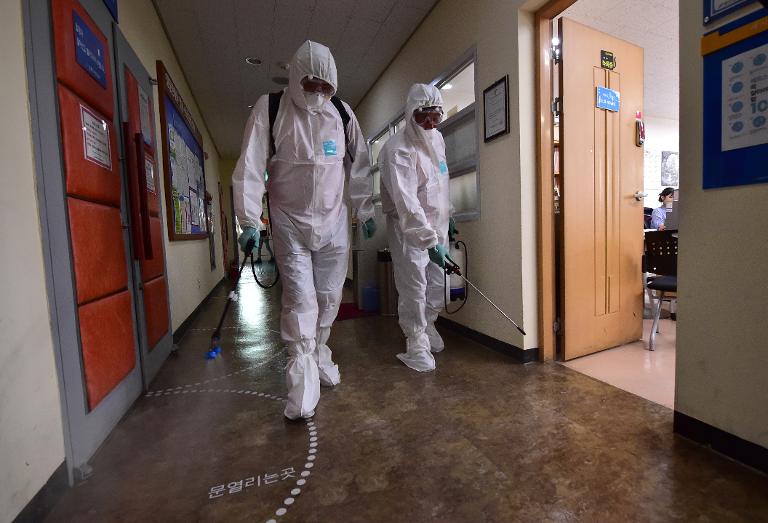 In what has become the largest outbreak of the virus outside Saudi Arabia, a 72-year-old woman died Friday after being infected by a MERS patient at a hospital, the health ministry said.

The number of new cases, however, fell to four, down from 14 the previous day and 13 on Wednesday, bringing to 126 the total number of people in South Korea diagnosed with the virus.

Currently, 3,680 people are under quarantine, down from 3,805 the previous day. A total of 1,249 people have been released from quarantine, including 294 on Friday.

“The number of newly confirmed cases has fallen sharply and there are little risks of the virus spreading through airborne transmissions or to communities outside hospital settings”, the ministry said in a statement.

“Therefore, we ask the people to conquer their fear and engage in day-to-day business,” it said.

On Thursday, the outbreak forced the central Bank of Korea to cut its key interest rate by 0.25 percentage points as the spread of the virus dampened already weak consumer sentiment.

Businesses including shopping malls, restaurants and cinemas have reported a sharp drop in sales as people shun public venues with large crowds.

More than 54,000 foreign travellers have cancelled planned trips to South Korea so far this month, according to the Korea Tourism Board.

Following criticism that the government bungled the initial response, a Seoul hospital was closed temporarily over fears the facility might be another source of mass infection, the first such closure in the capital.

A total of 52 healthcare facilities including 18 in Seoul and 16 in the surrounding Gyeonggi Province have been exposed to the virus.

Pyeongtaek St. Mary’s hospital in Pyeongtaek City, where the first wave of 37 patients were diagnosed, will also remain closed until Friday, based on the incubation period for the disease.

But Samsung Medical Centre, where 58 out of the 126 confirmed infected people contracted the disease — the biggest single group — remains open after being sanitised.

The first infected patient was diagnosed on May 20 after a trip to Saudi Arabia.

The 68-year-old man visited four medical facilities, infecting other patients and medics, before he was finally diagnosed.