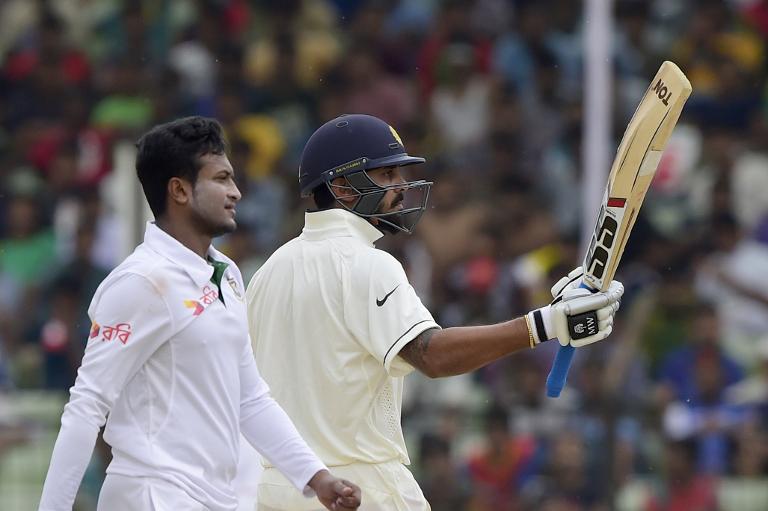 Murali Vijay hit 150 and Shakib Al Hasan grabbed four wickets as bad weather once again played havoc with the one-off Test between India and Bangladesh in Fatullah on Friday.

Ajinkya Rahane chipped in with 98 as India ended the heavily curtailed third day’s play at 462 for six in their first innings at the Khan Shaheb Osman Ali stadium.

Just 47.3 overs were sent down during another wet, miserable day that had begun brightly, allowing India to add 223 runs to their total of 239 for no loss on the first day.

With only 56 of the stipulated 90 overs bowled on the opening day and the entire second day’s play washed out, the match is headed for a draw. More rain has been forecast for the last two days.

But the brief spell of play on Friday saw dominant batting from Vijay and Shikhar Dhawan, who carried their opening partnership to 283, before Rahane boosted the total.

Left-arm spinner Shakib was the lone bowler to make an impression on the slow pitch with figures of four for 105. Leg-spinner Jubair Hossain claimed the other two wickets.

Vijay said India are well-placed to force a win over the last two days, provided the weather does not interfere with the game.

“We can’t do much about the weather, but we are in a good position and hopefully we can do something special in the remaining time,” he said.

“The wicket was a good one to bat on initially, and then it became slower. So I had to adjust the pace of my innings. Since Shikhar gave us a brilliant start, I just wanted to hang in there and play as long as possible.

“The wicket is deteriorating and it is definitely going to help both our spinners (Harbhajan Singh and Ravichanandran Ashwin).”

Shakib said his team was aware of the importance of batting well over the last two days to save the game.

“India don’t have anything to lose and they will come hard at us, but we have to bat well for six sessions and score a lot of runs,” he said.

“We are aware of the situation and are mentally ready for the task ahead. There is no problem with the pitch. There is no uneven bounce either. If the wicket stays like this we can handle the Indian bowling.”

Play started on time under sunny skies and India moved to 398 for three by the end of the extended morning session.

Shakib broke the double-century opening stand when Dhawan mistimed an on-drive and lobbed an easy return catch to the bowler.

Left-handed Dhawan, who started the day on 150, took his score to 173, which included 23 hits to the fence.

It soon became 310-3 when Jubair forced skipper Virat Kohli to drag a ball onto his stumps after the batsman had made 14.

But Rahane thwarted Bangladesh by adding 114 for the fourth wicket on either side of the lunch break.

Vijay hit 12 boundaries and a six in his sixth Test century.

Rahane missed his fourth hundred by two runs when he was bowled attempting a pull shot after smashing the previous two deliveries for boundaries.