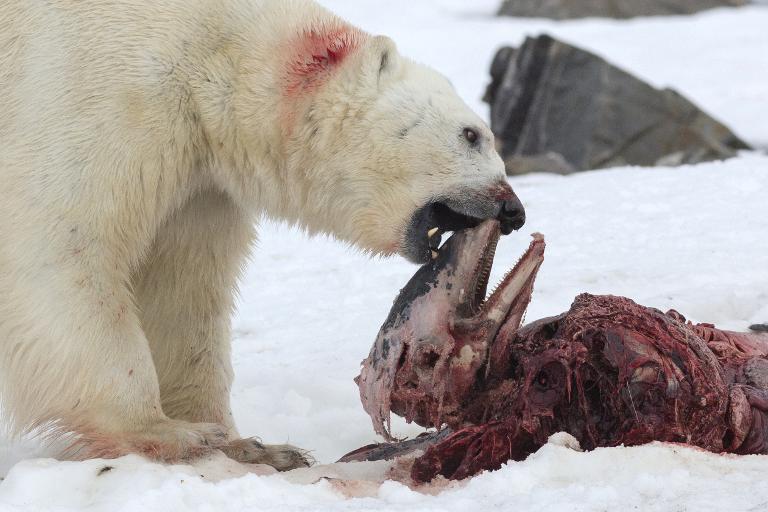 Norwegian scientists have seen polar bears eating dolphins in the Arctic for the first time ever and blame global warming for the bears expanding their diet.

Polar bears feed mainly on seals but Jon Aars at the Norwegian Polar Institute has photographed dolphins being devoured by a bear and published his findings in the latest edition of Polar Research this month.

The first incident he documented was in April 2014 when his team came across a polar feeding on the carcasses of two white-beaked dolphins.

Although dolphins are regularly seen in the Norwegian Arctic in the summer months when the ice has melted, they have never been observed during winter or spring when the sea is usually still covered in sheets of ice.

But Norwegian scientists have reported a strong retreat of ice and two nearly ice-free winters in recent years which they said could have attracted the dolphins further north, where they probably became trapped by the sudden arrival of dense ice blown into a fjord by strong northerly winds.

Aars said the bear he photographed had probably caught the two dolphins when they surfaced to breathe through a tiny hole in the ice.

“Even if they saw the bear, the dolphins did not necessarily have any other choice,” he said.

In the photos a visibly skinny old male bear devours one of the dolphins and appeared to have stored a second one under snow for later — something which scientist had never seen before.

“We think that he tried to cover the dolphin in snow in the hope that other bears, foxes or birds would have less of a chance of finding it. Maybe to be able to eat it a day or two later, once he had digested the first one,” said Aars.

After the first incident in 2014, a further five cases of dolphins stranded or captured and then eaten by bears have been reported.

“I don’t think that this signifies a great upheaval” in the diet of the carnivores, said Aars.

“It’s just that the polar bear is coming into contact with species they have not been used to meeting until now.”

Sitting at the top of the Arctic food chain, polar bears are opportunistic predators that are also known to feed on small whales if the opportunity arises.