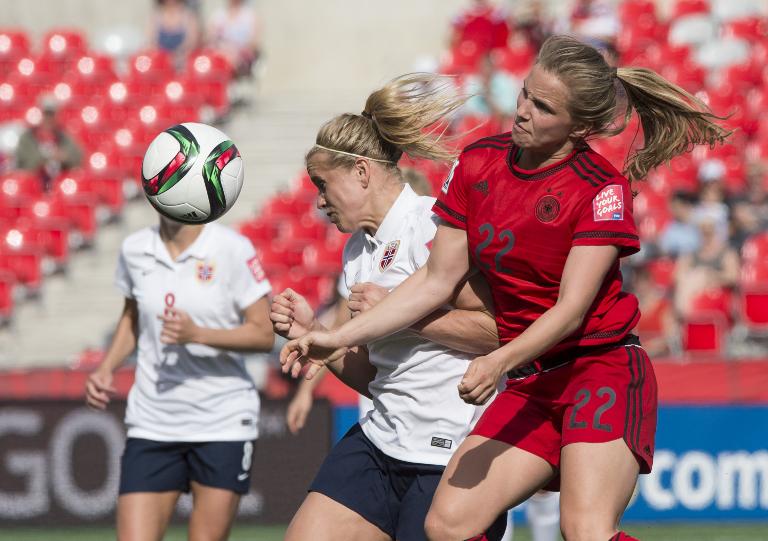 A second half Maren Mjelde equaliser grabbed a 1-1 draw for Norway against top ranked Germany in a clash of former champions which leaves Group B wide open in the Women’s World Cup.

Anja Mittag had put 2003 and 2007 champions Germany ahead after just six minutes with her fourth goal of the tournament following her hat-trick in their opening 10-0 whipping of Ivory Coast.

“We just didn’t play as well in the second half – and then Norway gained hope,” said Neid.

The result leaves Germany and Norway topping Group B with four points, with one game to play.

Thailand, who lost their opener to Norway 4-0, play fellow newcomers Ivory Coast in the other group game later Thursday.

A Dzsenifer Marozsan long range could not be controlled by Norway goalkeeper Ingrid Hjelmseth, allowing Mittag to pick up the rebound and score just minutes into the match at Lansdowne Stadium.

Norway coach Even Pellerud credited the entrance of substitute midfielder Solveig Gulbranson at half-time with lifting their game.

“(Solveig) changed the whole outlook and approach of her team-mates – they were confident passing in the midfield to her, and she has a good presence.

“The end result was fair, but we were lucky – (Germany) could have killed this game in the first half.”

Marozsan, who missed Germany’s first match due to injury, was impressive throughout the first half as Neid’s side continued to threaten Norway’s backline.

But Mjelde put Norway level on the hour mark with a superb free-kick on the edge of the penalty area.

Mjelde, who saw her penalty saved in Norway’s first match against Thailand, curled over the wall and into the top corner.

“I still think we were the better team,” said Neid.

“We had a lot of opportunities to score – 24 shots on goal to six. It showed we were dominant in this game but it nearly turned.”

In the final round of group games on Monday, Germany play Thailand in Winnipeg and Norway take on the Ivory Coast in Moncton.