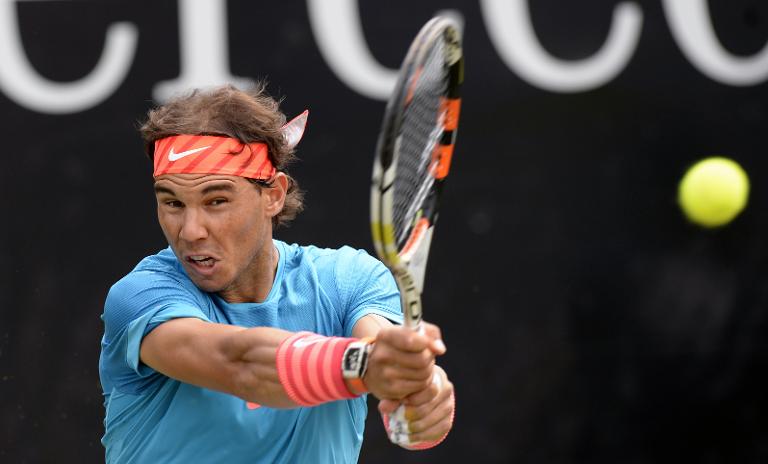 Rafael Nadal began the difficult annual transition from clay to grass on Thursday, taking more than two and a half hours to advance to the quarter-finals of the Stuttgart Open.

Nadal managed to win the opening set as he began the pre-Wimbledon season at the venue where he claimed 2005 and 2007 titles on clay.

Nadal will next face fifth seed Bernard Tomic after the Australian overpowered Tommy Haas 7-6 (8/6), 6-2 to end the veteran’s comeback after a year on the sidelines following his fourth shoulder surgery.

Nadal was pleased to escape an upset at the hands of Baghdatis just over a week after crashing out the French Open as a 39-match win streak at the venue was ended by Novak Djokovic in the quarter-finals.

“I’m very happy to win this match, it’s good to be in the quarter-finals,” said the 29-year-old Spaniard.

“Marcos made it difficult, he’s a tough opponent on this surface.

“I need to play more aggressively if I’m to improve on the grass. This was an important victory for me, it’s good for the confidence.

“I have great memories of winning here when Stuttgart was clay, but I’m going to try my best to win it on grass now.”

Nadal won the opening set after more than an hour and saved two Baghdatis set points in the 10th game of the second before the 63rd-ranked challenger levelled at a set each by winning a tiebreaker.

Nadal gathered his powers in the third set, breaking for 3-1 to eventually run out the winner.

Tomic had to battle to close out victory, with former world number two Haas saving three match points in the penultimate game on the new grass of the Weissenhof club, which was changed from clay in time for this edition.

Tomic concluded victory with a love game to advance to the last eight in just over an hour and a quarter.

“I was down 6-4 in the tie-break and managed to hit an unbelievable pass,” said Tomic. “That was the turning point.

“I managed to hit the right shot at the right time. In the second set, I felt like I played the right tennis and played really well.

“Match by match I’m getting better, which is the most important thing I think.”

Tomic’s win gave him bragging rights in Germany after losing to Haas three years ago on grass in Halle when the Aussie retired in the first set due to an abdominal injury.

Mischa Zverev assured at least one local in the quarters as he defeated Italian Andreas Seppi 6-2, 6-4.

Zverev, ranked 502, will be playing in his first quarter-final since Halle in 2013 when he lost to Roger Federer.