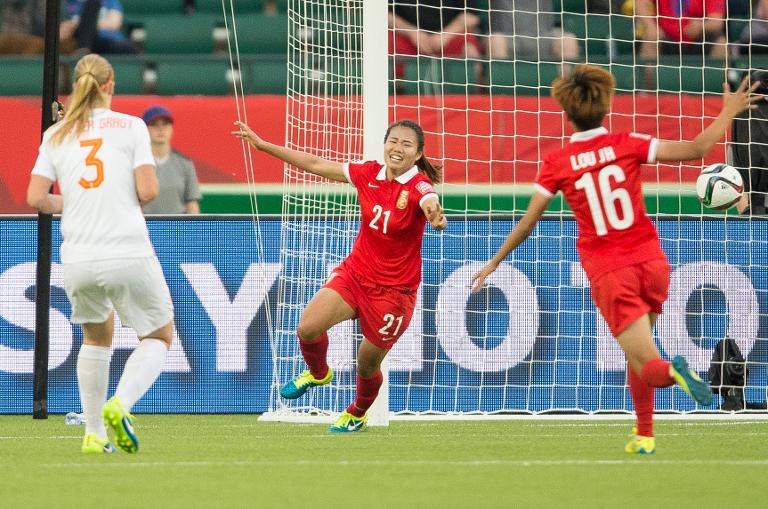 Wang Lisi scored in the dying minutes to hand China their first win of the Women’s World Cup on Thursday, a 1-0 victory over Group A rivals the Netherlands.

The tie in Edmonton’s Commonwealth Stadium looked to be heading for frustration for the dominant Chinese when Wang broke through to roll the ball past Sari Van Veenendaal in the Dutch goal.

China had lost their opener against Canada 1-0 following a last-gasp penalty while the Netherlands beat New Zealand by the same scoreline.

“I think they did an excellent job today. We could have scored more and been more efficient,” said China coach Hao Wei.

“What is important is that the team stuck together until the very last minute which is the most important.”

It was a deserved victory for the 1999 runners-up who dominated play but had been unable to finish off until Wang’s 91st minute goal.

“We played in a completely different manner than against New Zealand,” said Dutch coach Roger Reijners, whose young side are making their first World Cup appearance.

“Everybody is disappointed about the result, nobody is happy right now and also Vivianne (Miedema),” he added of the 18-year-old striker who had looked like scoring midway through the first half after picking up a Manon Melis pass only to hit wide.

China’s Tang Jiali then had a chance after the break but she shot straight at Van Veenendaal, who punched clear.

But Wang, 23, made no mistake as she accelerated to latch onto a long ball after outfoxing the Dutch defence to fire home for a deserved winner.

“Wang Lisi did an excellent job today, under pressure in the first half,” said Hao.

“We did a lot of analysis in terms of game plan and strategy. They executed the plan and I’m very happy about that.

“Both teams are very young, they lack tournament experience,” he continued.

China, Canada and the Netherlands now have three points, with the hosts taking on New Zealand later on Thursday in their second group fixture.

“In the beginning I said Group A was very even, all teams are similar in their strengths so I wish we could have scored more,” added the Chinese coach.

“For different teams we have different strategies, we will have another one for the next game.”

In the final Group A games on Monday, Canada will play the Netherlands and China face New Zealand.