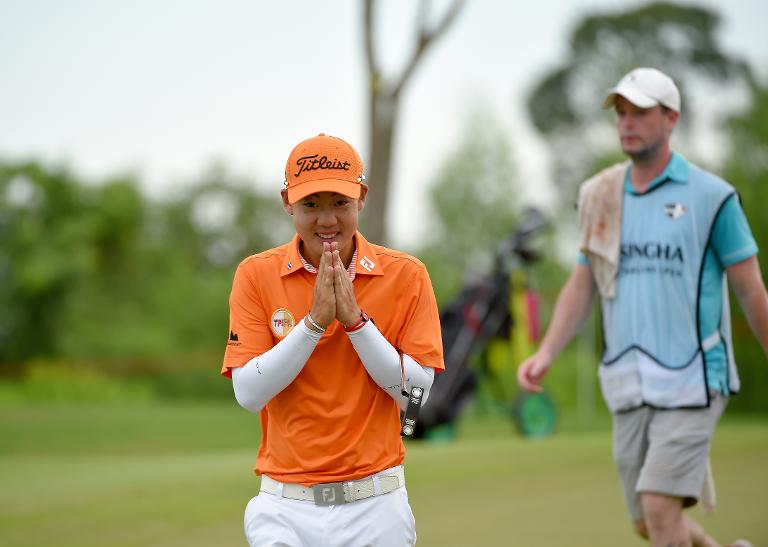 Thai rising star Jazz Janewattananond hit seven birdies to join South Korea’s Kim Kyung-Tae at the top of the leaderboard on nine under par after the weather-hit second round of the Thailand Open in Pattaya on Friday.

Only a bogey on 14 stopped Jazz, who turns 20 in November, from taking the outright lead from Kim, as South Korean golfers continued their strong run at the $1 million event.

Kim plundered five birdies on the front nine and eight in total to return to the clubhouse with a flawless 64.

A first-round 71 had not however suggested he would storm into contention for the joint-sanctioned OneAsia and Japan Golf Tour Organisation title being played at the Thai resort city of Pattaya.

On a day when the threat of summer storms interrupted play, China’s Zhang Xin-jun finished a shot back on eight under after an uneven round that featured two bogeys, an eagle and a string of birdies.

Namchok Tantipokhakul was also a shot off the lead after an impressive 66, with his fellow Thais matching the Korean charge.

Local hero Prom Meesawat, who hit a 69 on day one, made five early birdies but was a late finisher after the delays.

Also in the mix was Kiradech Aphibarnrat, whose 68 — lit up by an eagle on the par five second hole — put him just three shots off the lead.

Overnight leader Kim Hyung-Song hit a double bogey at 11 in a rain delayed round to draw him back into the pack after an impressive first round 65.

Thailand’s Panuphol Pittayarat, who started the day with a 66 under his belt, blundered to a second round 74 with five bogeys.